Four-legged snake is missing link between lizards and serpents

An "absolutely exquisite" fossil of a juvenile snake with limbs has been discovered by English paleontologists in Brazil. The fossil dates back from the early Cretaceous, 110 million years ago, and is the oldest evidence of a definitive snake.

An “absolutely exquisite” fossil of a juvenile snake with limbs has been discovered by paleontologists, forgotten in a museum. The fossil dates back from the early Cretaceous, 110 million years ago, and is the oldest evidence of a definitive snake. 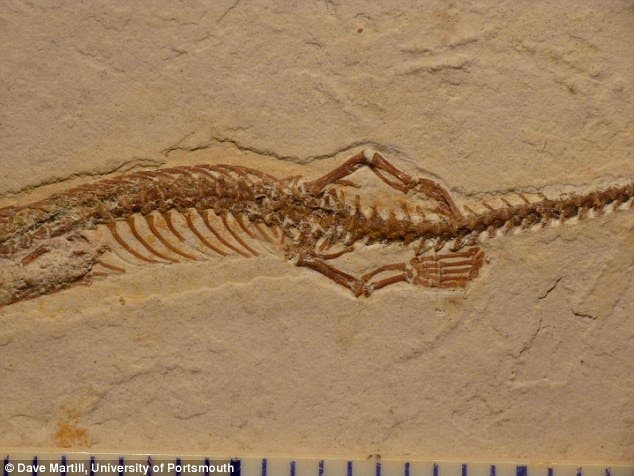 Snakes are elongated, legless, carnivorous reptiles that evolved in the late Cretaceous; the earliest evidence (before this) of a snake was 94 million years old, but the fossil record of snakes is relatively poor because snake skeletons are typically small and fragile making fossilization uncommon. Based on comparative anatomy, there is consensus that snakes descended from lizards, and these legged snakes further strengthen this theory.

Dr Dave Martill from the University of Portsmouth who conducted the study, says this fossil can show how and why snakes lost their limbs. 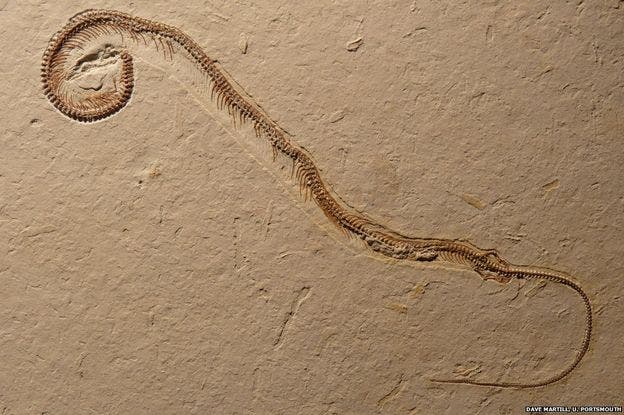 The first observation that they made is that the limbs show adaptation for burrowing, not swimming, which indicates that snakes evolved on land, not in water, as was proposed by some scientists.

“This is the most primitive fossil snake known, and it’s pretty clearly not aquatic,” said Dr Nick Longrich from the University of Bath, one of the study’s authors.

Researchers were actually surprised by how clear the features of the fossil are – they were expecting something more ambiguous, more “in between”. Instead, he saw “a lot of very advanced snake features” including its hooked teeth, flexible jaw and spine – and even snake-like scales.

Furthermore, the fossil also reveals that the ancient snake had ingested a vertebrate – a clearly snake behaviour.

“And there’s the gut contents – it’s swallowed another vertebrate. It was preying on other animals, which is a snake feature. It was pretty unambiguously a snake. It’s just got little arms and little legs.”

The snake, named Tetrapodophis amplectus by the team, measured just 20 cm from head to tail, though it likely grew much bigger than that in adulthood. The head was about the size of a fingernail and the limbs were actually very little, but still useful.

“They’re actually very highly specialised – they have very long, skinny fingers and toes, with little claws on the end. What we think [these animals] are doing is they’ve stopped using them for walking and they’re using them for grasping their prey.”

The fossil had a history as strange as the snake itself. It was simply acquired by a private collector, where it languished for decades before a museum in Solnhofen, Germany, acquired and exhibited it with the label “unknown fossil”. It was actually when Dr David Martill, another of the paper’s authors, took his students out for a field trip that the fossil was rediscovered and properly appreciated.

“All of a sudden my jaw absolutely dropped, when I saw this little fossil like a piece of string,” said Dr Martill, from the University of Portsmouth. He immediately asked for permission to study the fossil more closely. “The fossil was part of a larger exhibition of fossils from the Cretaceous period. It was clear that no-one had appreciated its importance, but when I saw it I knew it was an incredibly significant specimen.”