by Mihai Andrei
in Geology
Reading Time: 4 mins read
A A
Share on FacebookShare on TwitterSubmit to Reddit

Scientists at Scripps Institution of Oceanography at UC San Diego have found a layer of liquefied molten rock in Earth’s mantle that may be acting as a lubricant for the sliding motions of the planet’s tectonic plates. This discovery has very far reaching implications, which can solve some of the long standing geological puzzles, as well as lead to a better understanding of earthquakes and volcanism. 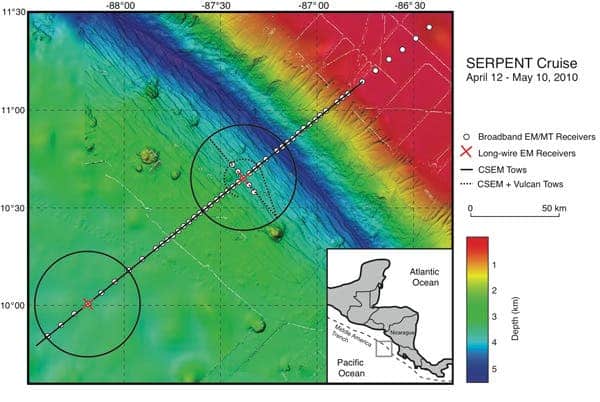 They used a relatively common, but uniquely improved geophysical technique (magnetotellurics), which involved advanced seafloor electromagnetic imaging technology. They imaged a 25-kilometer- (15.5-mile-) thick layer of partially melted mantle rock below the edge of the Cocos plate where it moves underneath Central America. They basically deployed a vast array of seafloor sensors that monitor the natural electromagnetic signals to map features of the crust and mantle. Back in 2010, they started noticing something was weird – they were finding magma in unexpected places. 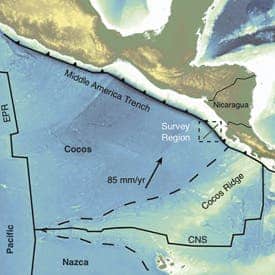 “This was completely unexpected,” said Key, an associate research geophysicist in the Cecil H. and Ida M. Green Institute of Geophysics and Planetary Physics at Scripps. “We went out looking to get an idea of how fluids are interacting with plate subduction, but we discovered a melt layer we weren’t expecting to find at all-it was pretty surprising.” 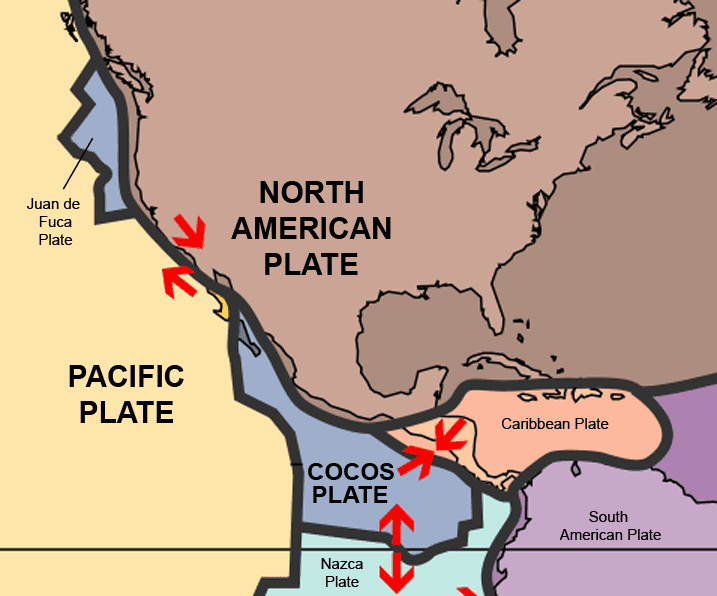 The marine electromagnetic technology employed in the study was originated by Charles “Chip” Cox, an emeritus professor of oceanography at Scripps, and further improved by Constable and Key. The method has been so successful, that since 2000, they have been working with big oil companies to map out offshore oil and gas reservoirs.

Plate tectonics is, if you will, the backbone of modern geology and geophysics. It is not perfect, by any standards, but it is a good theory that describes the large-scale motions of Earth’s lithosphere; one thing that’s been puzzling is the exact forces and mechanisms that allow the planet’s tectonic plates to slide across the earth’s mantle; one theory was that as minerals go deeper in the mantle, the water they contain is ejected, and this results in a more ductile mantle that would facilitate tectonic plate motions. However, no clear data has been provided to confirm or infirm this theory.

“Our data tell us that water can’t accommodate the features we are seeing,” said Naif, a Scripps graduate student and lead author of the paper. “The information from the new images confirms the idea that there needs to be some amount of melt in the upper mantle and that’s really what’s creating this ductile behavior for plates to slide.”

Indeed, if there isn’t some major flaw with this study, then it could pretty much change the way we view this sliding mechanism.

“This new image greatly enhances our understanding of the role that fluids, both seawater and deep subsurface melts, play in controlling tectonic and volcanic processes,” said Bil Haq, program director in the National Science Foundation’s Division of Ocean Sciences.

To get to the conclusion that there is a layer which acts as a lubricant, they studied the fluid content of the subducting plate offshore Nicaragua and Costa Rica. Magnetotellurics and controlled source electromagnetics imaged the porosity variations associated with lithospheric bending and cracking near the trench, as was suggested by a previous reflection seismic imaging. Analyzing the obtained parameters, they modeled this lubricant layer.

Their results, if valid, could help geologists better understand the genesis of some earthquakes, as well as some questions unanswered for decades.

“One of the longer-term implications of our results is that we are going to understand more about the plate boundary, which could lead to a better understanding of earthquakes,” said Key.

Now, the next step is to figure out how exactly is this layer formed and the source that supplies this magma.