It was about as big as T-Rex, but not quite as fit – new fossils have revealed that Deinocheirus mirificus had quite a beer belly.

“This is an entirely new body plan” for such dinosaurs, says Stephen Brusatte, a vertebrate palaeontologist at the University of Edinburgh, UK.

Indeed, few scientists would have imagined such a scientific appearance. The first fossils of Deinocheirus mirificus (which means ‘unusual horrible hand’ in a mixture of Greek and Latin) were dug in 1965 in the Gobi Desert, in Mongolia. The fossils were quite significant: a few rib and vertebra fragments and a remarkable set of shoulder girdles and 2.4-meter-long forelimbs, the longest yet found for a bipedal animal of any era (although some flying animals, notably pterosaurs, had longer wings). 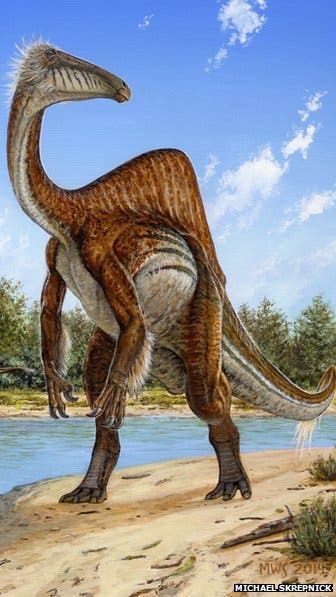 After analyzing the bones, paleontologists placed in a group of therapod dinosaurs called ornithomimosaurs – bird-mimicking dinosaurs. They believed Deinocheirus was related to T-Rex and Allosaurs – some of the most fierce creatures to walk on Earth, explains Yuong-Nam Lee, a vertebrate palaeontologist at the Korea Institute of Geoscience and Mineral Resources in Daejeon, South Korea, and a co-author of the study.

However, in a later expedition, Lee and his colleagues unearthed a much more complete skeleton – 95% intact. Some of the bones had been gathered by poachers but were further recovered by Lee from a private collection. These new fossils were shocking.

For starters, the spinal vertebrae have blade-like projections that extended upward and served as anchors for a network of ligaments; but there would not be a need for such a strong and well fitted system unless the animal had a huge belly. Deinocheirus measured about 11 meters long and tipped the scales at more than 6.3 tons. That’s much more than you would expect for this size.

“This is definitely an unusual animal,” says Thomas Holtz, Jr., a vertebrate palaeontologist at the University of Maryland in College Park, who wrote an accompanying News & Views piece. “It had more of a ‘beer belly’ than your typical ornithomimosaur,” he suggests.

There is still no explanation or theory for why it was built like this. What researchers do know is what it ate. With its 1 meter long toothless head, Deinocheirus ate lots of things. The content of its stomach were also found fossilized: fish vertebrae and scales suggest that Deinocheirus also consumed large quantities of aquatic prey. But the way its head is built suggests that it also feasted on vegetation – it was likely omnivorous, eating both plants and other animals.

Paleontologists believe that throughout Earth’s history, several dinosaurs were omnivorous, though that was likely pretty unusual. The physical build also had a lot to do with its diet – it’s likely that the dinosaur initially evolved as carnivorous, only to change its way and to eat more plants. It seems plausible to me that if this was the case, then it would need to eat more plants to satisfy its energy needs, and therefore develop this “beer belly”.

The beast was a slow mover, but it had long feet with hooves, which would have prevented it from sinking into the boggy wetlands where it lived. Commenting on the research Prof John Hutchinson, a palaeontologist from the UK’s Royal Veterinary College, said:

“Many dinosaur fans have seen pictures of the 8ft-long arms and hands, and they really are amazing and wonderful. People were really wondering what the rest of this animal looked like. Now we know, and it’s just so freaking weird – we never would have expected this animal to look so bizarre. It really is shocking to see how many weird features it has. It changes our view of what kind of forms dinosaurs can even take.”

Yep, when scientists call something “freaking weird” – that’s when you know something’s up.