A strong earthquake with an epicenter off the northeastern coast of Japan shook buildings all the way to Tokyo, leading to a tsunami warning for coastal areas of the northeast. 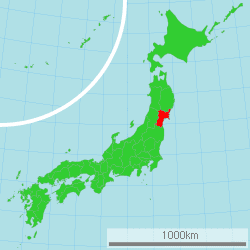 The first estimate of the magnitude was 7.4, but was then lowered to 7.3. The United States Geological Survey (USGS) explained there is no risk of a widespread tsunami for other areas in the Pacific, but a warning for a one-meter tsunami was issued for the coast of Miyagi Prefecture in northeastern Japan – the same area which was most hit by the 9.1 earthquake and consequent tsunami in March 2011. However, unlike that massive earthquake, this one poses no threat to the Fukushima power plant – no irregularities were reported at the site.

The 2011 earthquake caused a huge tsunami, much more than the Fukushima power plant was prepared to handle, causing radiation leakage, contamination of food and water and mass evacuations; the Japanese authorities handled the situation absolutely admirable, and a bigger crisis was averted.

As it seems, the geological situation in the area is still extremely volatile; many more such “smaller” temblors are expected, but an earthquake of that magnitude is very unlikely to happen again in the near future.