Another powerful seismic event has taken place, this time in Turkey; the 7.2 earthquake in case struck eastern Turkey on Sunday, killing at least 60 people and turning most buildings into big chunks of concrete and metal. 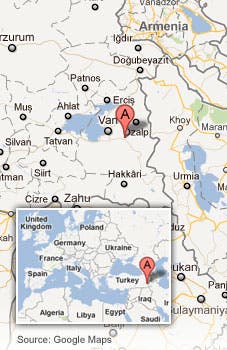 However, Turkish scientists grimly predict that the victim count could easily go above 1000, as housing conditions are especially low in eastern Turkey. The city of Ercis, a city of 75,000 in the mountainous province of Van close to the Iranian border was hit the hardest, and there is still no official report about the state of the city. The city lies on the Ercis fault, one of Turkey’s most seismic prone areas.

“There are so many dead. Several buildings have collapsed. There is too much destruction,” Ercis mayor Zulfikar Arapoglu told NTV television. “We need urgent aid. We need medics.”

Turkey lies in one of the world’s most active seismic regions, with numerous faults that cause massive earthquakes of over 7 (just so you can get an idea, a 7 degree earthquake is 10 times more powerful than one with the magnitude of 6). US scientists reported no less than eight replicas of the temblor, one of which was 5.6.