Secrets of dinosaur footprints revealed, thanks to goldilocks effect 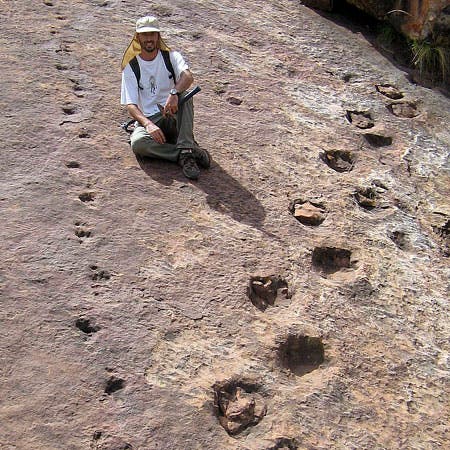 A groundbreaking research conducted by the University of Manchester showed that terrain thought to be ruled only by giant dinosaurs was shared by numerous other smaller species. Dr. Peter Falkingham made a very interesting discovery, showing that dinosaurs can create lasting footprints, but under the right circumstances, combined with the right animal weight.

The research is extremely important because significant dinosaur track sites played a keyrole in understanding and simulating mesozoic environments, but these simulations may be flawed, and numerous other species may have walked the same areas, without leaving any footprints behind.

Dubbed the Goldilocks effect (that word seems to be everywhere these days), because every condition has to be just right, this finding also relied on computer simulations, with researchers modifying the conditions of the mud and dinosaur weight; they showed that only really big dinosaurs have a significant chance of leaving a footprint when the mud was tougher, while in softer mud, it was the other way around.

“That’s very hard to do with physical modeling, more so when you need to do it 20 times in 20 different types of mud. But the real advantage of computer modeling is that everything is controllable. We were able to ensure that in every simulation we could look at the effects of each variable (for instance, the shape of the foot, or the weight of the animal) independently. Now we can use this “Goldilocks” effect as a baseline for exploring more complicated factors such as the way dinosaurs moved their legs, or what happens to tracks when a mud is drying out.”