by Tibi Puiu
in Discoveries, Research, Studies
Reading Time: 2 mins read
A A
Share on FacebookShare on TwitterSubmit to Reddit 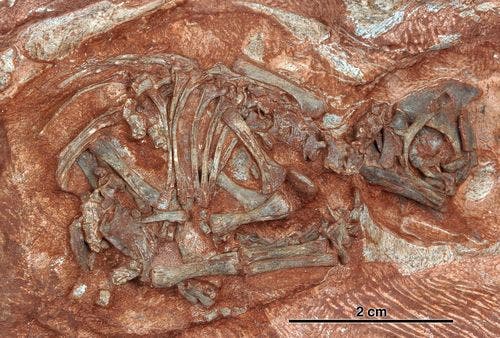 In a remarkable discovery, reported Friday in the journal Science by a team of paleontologists headed by Robert Reisz of the University of Toronto, archeologists unveiled detailed photos and insights of the world’s oldest dinosaur embryo found to date. In the past years, archelogists have managed to find true dinosaur relics, unveiling dinosaur eggs containing embryos 80 million, 100 million and even older, however this latest find tops anything up to now – an 190 million year old dinosaur embryo. It’s the oldest fossilized embryo of any kind of vertebrate ever found.

Dating back from the Jurassic period, the fossils were actually excavated in 1978 in South Africa, but it’s taken more than 40 years to successfully and tidily uncover the rock and eggshell debris for clear picture of the remains to be formed.  The fossils reveal a hatchling Massospondylus, a member of a group of dinosaurs known as prosauropods, ancestors to the giant, plant-eating sauropods (brontosaurus or diplodocus). As adults, these creatures reached lengths of more than 15 feet and were able to walk on two legs.

The fossilized embryo revealed very interesting facts, respectively that the they would have looked very different from the adults of the species, according to the researchers. The surprising conclusion was reached by Dr. Reisz and his colleagues as a result of a detailed examination of the horizontal neck, heavy head and limb proportions of the embryo skeletons. Similar to humans, these dinosaurs began moving about on all fours before maturing to biped life.

“I don’t think anybody else could have done this job,” Reisz said.

Besides the quadruped early life behavior, the  infant massopondylus didn’t posses any teeth, according to the fossils, suggesting the earliest parental care in history.

“This project opens an exciting window into the early history and evolution of dinosaurs,” says Reisz. “Prosauropods are the first dinosaurs to diversify extensively, and they quickly became the most widely spread group, so their biology is particularly interesting as they represent in many ways the dawn of the age of dinosaurs.”