Deep lying bacteria found, reproduce only once in 10.000 years

A surprisingly diverse range of life forms exists deep in the oceanic crust, but they live at an extremely slow pace. Long lived bacteria, which reproduce only once in 10.000 years, have been found in rocks 2.5km below the ocean floor, rocks which are 100 million years old. Viruses and fungi have also been found in the same conditions. 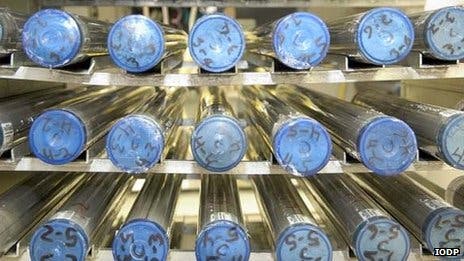 Aside from its intrinsic value, the discovery raises some significant questions, regarding how life can persist under such extreme conditions of temperature, pressure, and apparent lack of nutrients. Scientists from the Integrated Ocean Drilling Program have announced the findings at the Goldschmidt conference, in Florence, Italy.

It’s not the first time the Integrated Ocean Drilling Program has come up with exciting results – in 2012, they set a new record for scientific ocean drilling, and in March this year, they reported the first case of bacteria living in the oceanic crust. Now, Fumio Inagaki of the Japan Agency for Marine-Earth Science and Technology explained that the microbes exist in very low concentrations – around 1000 in every teaspoon of sample, compared to the billions or trillions which you would get in the same amount of surface material.

Just as interesting, they found that not only do viruses also exist at these depths, but they significantly outnumber the bacteria – 10 to 1, and even more as you go deeper. This offers some important information on what we know on viruses.

“We’re pushing the boundaries of what we understand about how viruses cycle on Earth elsewhere, by studying them in the deep biosphere” Dr Beth Orcutt of Bigelow Laboratory for Ocean Sciences in Maine, US, explained.

The characteristics of these specimens make researchers question if they even are alive.

“One of the biggest mysteries of life below the sea floor is that although there are microbes down there it’s really hard to understand how they have enough energy to live and how incredibly slowly they are growing.

They are reproducing so rarely that it’s very much unlike anything science has encountered so far.

“The other question we have is that even though we are finding cells, is it really true to call it alive when it’s doubling every thousands of years? It’s almost like a zombie state,” Dr Orcutt commented.

A reproductive cycle of 10.000 years is indeed a few magnitudes of order higher than anything we know, but these microbial communities which inhabit the deep earth are alive by every definition, and they may very well change what we think about life itself.