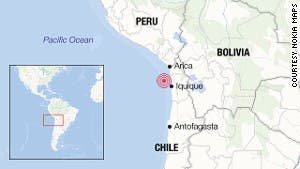 An 8.2-magnitude earthquake hit near the coast of Chile last night, triggering multiple strong aftershocks and a 6-foot (3 meter) tsunami. There have been at least five confirmed casualties, with the victims being crushed or suffering from heart attacks.

“The fact is, we will know the extent of the damage as time goes by and when we inspect the areas in the light of day,” Chile’s President Michelle Bachelet said early Wednesday. “The country has faced these first emergency hours very well.”

The earthquake hit just 50 miles southwest of Cuya, Chile at 6.2 miles deep in the Pacific Ocean.

The tsunami warning also struck fear into Chilean people, but thankfully, the tsunami was relatively small in amplitude. However, the earthquake itself was very strong – the shaking was so strong that it was felt 300 miles away in Bolivia and aftershocks measured up to 6.2 in magnitude. However, while the extent of damage was considerable (landslides damaged roads in some regions, power and phone outages were reported in others), given the tectonic context, the situation could have been much worse.

Chile is located in one of the most volatile areas in the world – tectonically speaking. The country spans over the so-called “Ring of Fire” – the tectonic edge between the South American plate and the Nazca plate. The Nazca plate is slowly subducting (moving under) the South American plate, the most obvious result of which is the Andes Mountain range; this movement also causes massive earthquakes, as well as increased volcanic activity in the area.

Geologists worry that the energy is still not released, and Chile may have to face an even stronger event in the near future.

“As big as an 8.1 is, it probably has not released all of the stored up energy on the subduction earthquake fault in northern Chile. For the sake of all of our friends in the region, we’re hoping that there isn’t a bigger one still to come,” said geologist Rick Allmendinger.