Copernicus: the treasure in the sky helping science and the climate with free and open data

Copernicus is one of the most valuable scientific programs in the world you likely never heard about.

by Tibi Puiu
in Feature Post, News, Science
A A

Due to human activity, most notably through rampant air pollution and urban expansion, humans have pushed the Earth system into a state that’s outside the range of the last half million years or so. Studying and quantifying the Earth’s system is thus of the utmost importance — and this is no easy task because it’s all ridiculously complex. Luckily, the technology and tools we’ve come to develop are also sophisticated, helping us rise to the challenge of understanding the Earth system’s past states, monitoring present conditions in real time, and predicting how the system could look like in the future. This is where Copernicus, ‘Europe’s eye on Earth’, comes in.

Our eye on Earth

Managed and coordinated by the European Commission, Copernicus is one of the most important scientific organizations in the world you’ve likely never heard about. Previously known as the Global Monitoring for Environment and Security (GMES), the Copernicus Program integrates satellite and in-situ data with modeling to provide user-focused information services in six key areas; land, marine, atmosphere, climate change, emergency management, and security. 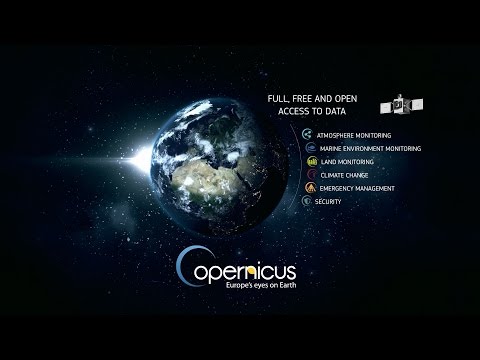 To monitor the planet, Copernicus uses thousands of sensors in land, sea, and air, but also six families of satellites known as ‘Sentinels,’ each with a different focus. For instance, Sentinel-1 is used for radar imaging and can capture high-resolution shots of the planet’s surface even through the cover of cloud. This is particularly important for monitoring crop health, for instance, providing value to farmers who can now time the application of fertilizers or irrigation with the growth stages of crops on a massive scale. The Sentile-3 mission, on the other hand, is focused on marine studies and uses its highly sensitive instruments to measure sea surface topography, sea and land surface temperature, and ocean.

In total, the Copernicus Program operates more than three dozen satellites across its Sentinel and contributing missions with more soon to follow. The most recent one, Sentinel-2B, was launched on 7 March at 2:49 CET from Europe’s Spaceport in French Guiana completing the Sentinel-2 mission.

All of this data, like surface temperature readings accurate to 0.1 degrees Celsius, get stored and processed at supercomputing facilities such as the one I visited at the European Centre for Medium-Range Weather Forecasts (EMCWF) headquarters in Reading, UK.  Thanks to this high-resolution multi-spectral imaging data, the EMCWF now operates the most complex and reliable weather forecast model in the world with a quasi-uniform distribution of 9 km-wide grid boxes.

“By 2025 we want to be able to run an ensemble of analyses and forecasts at a grid spacing of 5 km, requiring predictions and data processing for billions of grid boxes in less than a second,” said ECMWF scientist Nils Wedi in a statement.

And all of this data is free and open

If you’re a climate scientist looking to refine a model with higher resolution data or new entry points, you might want to download greenhouse gas fluxes or solar radiation, for instance. Governments can tap into the European Forest Fire Information System or the European Flood Awareness System to better prepare for emergency response, thus saving lives and millions in property damage. A biologist might find the Marine Environment Monitoring Service very useful for assessing fisheries, water quality (acidity, temperature, etc.) or pollution.

Emissions from the devastating 2015 Southeast Asia haze, which some have called a ‘crime against humanity’, were monitored by CAMS scientists who found the fires contributed to the largest single-year rise in atmospheric CO2 concentration ever measured. Such readings are important for climate change models that need to assess the impact of forest fires. For instance, the Indonesian haze contributed to 77% of the global total fire emissions of CO2.

“C3S provide access to both high-quality climate data and parameter designed to address the needs of specific socio-economic sectors. Such information can then be used by national met services, regional authorities, intermediaries, consultants of even end user to develop tailored services. For example C3S will provide information on future river flow and its water quality. This information can then be used to develop environmental policies as well as to provide critical inputs into the business plan for the construction of a new hydropower plant. Similar examples can be made for renewable energy, agriculture, urban-area management and pricing of insurance policy,” Dr. Carlo Buontempo, Manager of Sectoral Information System, ECMWF Copernicus Climate Change Service, said for ZME Science.

The same atmospheric data, however, are being used by other organizations to provide citizens and businesses with real-time air quality data. One startup from Israel called BreezoMeter is making good use of the petabytes of CAMS data by shaping it in a manner that is easily understood by policy makers, municipalities and citizens alike.  Precise air quality measurements are shown as colour-coded maps, charts, and even as health recommendations. For instance, right now BreezoMeter says Paris’ city center has a fair air quality index of 65 out of 100 which makes it “OK to go out and enjoy a stroll” but Beijing has 17 out of 100 which BreezoMeter says “This is the kind of poor air quality that the doctors warned you about. Don’t go outside now.”

“CAMS data is a highly valuable set of data for us. But, in order to provide up to the street level resolution worldwide air quality data, we are adding to our proprietary dispersion algorithm other sources of information, such as air quality monitoring stations, meteorological data, traffic and more. The CAMS has unique pollution data in many places that it is hard to find other sources and this is one of its big advantages,” Ziv Lautman, BreezoMeter co-founder, told me.

“The importance of Copernicus data to the scientific community and the private industry is enormous. CAMS was a main contributor to one of our crucial steps going global. without it, it would have take us lots of time to get to where we are now,” he added.

Here’s Andrew, a farmer from Allington U.K., describing how his family is using applied satellite imagery for precision agriculture. 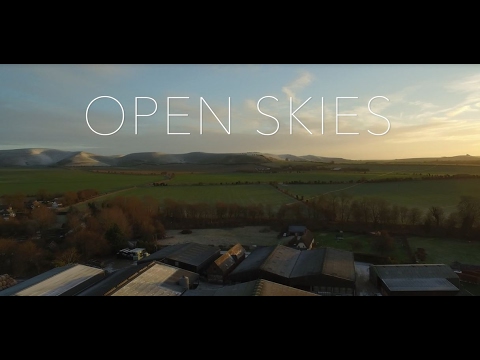 These are just a couple of example of how innovative startups and projects are making good use of Copernicus Services open data but, momentarily, we’re just scratching the surface.

“There is huge predicted growth in the global space sector with the largest percentage of that growth thought to come from downstream services.  I think that Copernicus data and services could be a huge contributor to that growth, particularly acting as reduced threshold and therefore access point to the exploitation of and benefit from satellite technologies.  It is therefore potentially a huge enabler,” Daniel Wicks, Earth Observation Specialist at Satellite Applications Catapult, told me.

Lots of data — it’s time to make it actionable!

Copernicus services generate so much stream of data that it’s the third largest data provider in the world, generating eight petabytes annually. But all of this data means nothing if you can’t make sense of it which can be a huge challenge.

“This is a truly amazing amount of data and  whilst standard tools exists to deal with it effectively these have not been designed to be used by a the end users and thus are not fit for purpose. One of the challenges we face here is how to transform the Petabyte of data we have into the few kilobytes that a decision-maker really needs without loosing the traceability of what has been done,” Buontempo told me.

You can right away tell this kind of effort can be very expensive. Indeed, the European Commission’s budget for Copernicus 2014 to 2020 is €4.3bn, the bulk going to maintaining current satellites and construction/launch of new Sentinels. But the EU has a lot of faith in Copernicus, not only because it’s a huge enabler of cutting-edge science but also because it has the potential to make a return of investment from downstream services. As more Sentinels are added to the Copernicus fleet, the benefits will only continue to compound.

“There are increasing numbers of satellites with broadening imaging capability, but this should be seen as a key enabler.  For example, higher frequency coverage (multiple images a day) from an increased number of satellites means we can build new applications that weren’t possible before from infrequent observations (one image a week), e.g. monitoring people movement.  The same is true of higher resolution imagery (25-30cm versus 10-20m).  An example here might be the ability to monitor city planning, e.g. how many new extensions to houses have been built?  In order to make this data more usable by a wider audience, there is a challenge around converting the raw data into analytics, information, modelling, and visualisation etc,” Wicks said.

“These are value added products onto which people can develop new applications and services.  The innovation comes from new techniques and tools for activities such as data fusion and storage.  The trend is now in service provision and some of the key relevant technologies that will be game changing are AI & machine learning, web technologies (e.g. linked data , natural language processing), cloud platforms (hosting the computer next to the data), spatial-temporal data infrastructures (on the fly data analysis and trend analysis over decades to provide insight), consumerisation of technology (user centred design, digital apps), 3D visualisation,” he added.

Despite all of Copernicus data is free and open to everyone, not just EU entities, it’s estimated Copernicus will accrue €13.5 bn up to 2020 not counting non-monetary benefits. Some 48,000 jobs tied to Copernicus services are expected to be created in the next fifteen years as new organizations built around Copernicus data services will continue to appear.

“Copernicus data is available for free and on an open basis. Data can be used by governments and public authorities to develop environmental legislation and policies or to take critical decisions in the event of an emergency, such as a natural disaster or a humanitarian crisis. In addition this data supports ‘value-added’ services tailored to specific public or commercial needs, resulting in new business opportunities for the private sector. The Copernicus data and services are already contributing to 10% of the revenues of Earth Observation service suppliers in Europe. And these benefits are expected to grow at 31% per year.” Hugo Zunker, Policy Officer, European Commission, said in a statement for the press.

It’s amazing how much can be achieved by making key data and information freely available to the public. Build it and they will come. In 2008, the US Geological Survey (USGS) released all of its Landsat satellite images collected over forty years openly and for free. NASA also has a huge treasure trove of open data up for grabs complete with APIs, open sourced software written by the community and of course high-resolution readings of planet Earth, the sun, quasars, black holes etc.

“There is a growing pressure from society in freeing up the data and open it access to the people. Copernicus is certainly an important example in this effort towards this,” Buontempo said.

As outlined several times in this article, the main challenge is transforming petabytes of raw data into actionable information that key decision makers can use to their advantage. This is a huge challenge. However, it can also be transformed into a rewarding opportunity for developers.

The ball is in your court!

“We are already seeing around the globe the impacts of a changing climate. Land and sea temperatures are rising along with sea-levels, while the world’s sea-ice extent, glacier volume and snow cover are decreasing; rainfall patterns are changing and climate-related extremes such as heatwaves, floods and droughts are increasing in frequency and intensity for many regions. The future impact of climate change will depend on the effort we make now, in part achieved by better sharing of climate knowledge and information,” Director of ECMWF’s Copernicus Services Juan Garcés de Marcilla said.