by Tibi Puiu
in Remote sensing, Science, Space
A A 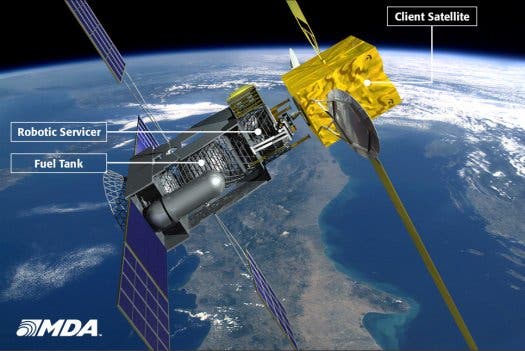 A lot of critics are raving towards the end of the space exploration age, as aerospace budgets get ever thinner, shuttle programs get retired or the fact that the lunar surface has remained unscratched by human hand for years and years. Where governments might fail, however, one can always put faith in the ever much better organized and efficient private sector, with more and more companies becoming interested in commercial space flights and exploration.

An innovative idea which I salute for its utility and business plan alike is the space fueling station concept developed by MacDonald Dettwiler and Associates (MDA). The Space Infrastructure Servicing vehicle, as it is dubbed, will fly in geosynchronous orbit (22,369 miles above the Earth), where it can reach several key commercial and government satellites for various tasks be it refueling, maintenance or repositioning.

The SIS would truly be a very practical device, however its most vital role would be re-fueling. Most space satellites operate relying on solar power, however for self-repositioning or orbital change they need a more powerful fuel, like hydrazine. Without it, there is the risk of the satellite becoming space junk or getting burned to smithereens while entering the planet’s atmosphere.

The station upon its launch, scheduled by MDA sometime in 2015, will have enough hydrazine to power about a dozen satellites, after which it will itself need to get refueled. A good analogy would be that of the service tanker that fuels a gas station.

The communications satellite company Intelsat, which has the most geosynchronous satellites, will be the first client.

Besides the tank obviously equipped for refueling, the SIS will also carry a robotic arm and a tool set for various maintenance duties. The robotic arm will be very useful for docking satellites in the refueling part or for re-orbiting satellites. It could even serve as a tow satellite, moving other spacecraft into a high-orbit graveyard zone or bringing them low enough to reenter the atmosphere and break up.

Watch the video below provided by MDA for a graphically animated explanation of the SIS concept.

“On-orbit refueling and servicing is a game-changing innovation,” said Thierry Guillemin, Chief Technical Officer of Intelsat. “It is important for Intelsat, managing the largest commercial satellite fleet, to support technologies and tools that expand our capabilities in space. We intend to implement this technology as a tool in fleet management that will improve operational reliability, increase the return on our on-orbit assets, ensure good stewardship of the space environment and deliver this increased flexibility to our government customers as well.”

“We are very pleased to have Intelsat, the world’s leading provider of fixed satellite services, as the anchor customer for our new SIS offering and our partner in accessing the US government market,” said Dan Friedmann, President and CEO of MDA. “There is a clear need to service the world’s space infrastructure, both commercial and government. The combination of MDA’s unparalleled and proven space servicing capabilities and Intelsat’s commercial and government market presence is a good way to get this new service off the ground.”

MDA and Intelsat will start building the satellite in the next six months, and the first space refueling will take place about four years from now.