The European Meteorological Satellite Organization (EUMETSAT) in collaboration with the Japan Meteorological Agency (JMA) and the National Oceanic and Atmospheric Administration (NOAA) released a time-lapse 4K video of the weather of 2015 -- and it's awesome.

by Alexandru Micu
in Climate, Environment, News, Videos
A A

The European Meteorological Satellite Organization (EUMETSAT) in collaboration with the Japan Meteorological Agency (JMA) and the National Oceanic and Atmospheric Administration (NOAA) just released a time-lapse 4K video of the weather of 2015 — and it’s awesome.

We’ve had our share of wild weather last year — the drought in California, hurricane Patricia or the staggering dust storms in the Middle East among the more extreme examples — most of it fueled by shifting climate patterns. But for all the destruction it can unleash, weather is usually a gentle mistress. Thanks to EUMETSAT, you can now relive the terrifying events as well as the pleasant days that don’t make it to the headlines, in an amazing high-definition video from space. 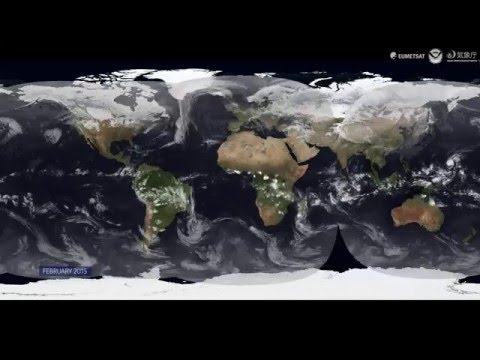 The northern hemisphere set a record for the most major tropical cyclones to form in a year, so keep an eye on the tropics throughout the video. Around the 6:30 mark, Hurricane Joaquin, the strongest Atlantic hurricane of the year, starts to form. This category 4 storm battered the Bahamas and the East Coast before raging all the way across the Atlantic into the U.K. At the 6:55 mark, Hurricane Patricia hits Mexico’s west coast before heading inland into Texas.

Beyond these destructive events the wider-reaching weather systems of our planet can be observed. During the Amazonian rainy season, lasting from December through April, clouds pop up over the region almost daily — but as the dry season sets in, they become far less common. Weather patterns roll over continents and oceans — a storm in the Southeastern U.S. today becomes next week’s rain in Spain.

EUMETSAT improved the image quality since last year, updating to a 4K resolution for incredible detail. This is possible due to the better quality satellites that both Japan and EUMETSAT launched into orbit last year. As NOAA plans to launch their own brand-new high resolution geostationary satellite this year, we can look forward to even sharper images in future videos.

Well, that and improved forecasts — but I’m always sold on eye candy.