It's quite possibly one of the most massive objects in the universe.

by Mihai Andrei
in Astronomy, Astrophysics, News, Science
A A

Every once in a while, you’ll learn something that makes you feel overwhelmingly tiny and insignificant — this is one of those things.

A group of 14 galaxies that formed about 1.4 billion years after the Big Bang are bound to merge, resulting in an incredibly massive structure, possibly the largest in the Universe. But there’s a catch: this all happened a really, really long time ago, but we’re only seeing it now.

In this case, the galaxies are packed into an area only four times the diameter of the Milky Way’s galactic disk, some 12.4 billion light-years away from Earth — so we’re seeing how they were 12.4 billion years ago. At the time when we can observe them, they were merging into a galaxy cluster, a rare phenomenon which we’ve only rarely observed.

“More so than any other candidate discovered to date, this seems like we’re catching a cluster in the process of being assembled,” says study co-author Chris Hayward, an associate research scientist at the Center for Computational Astrophysics at the Flatiron Institute in New York City. “This is the missing link in our understanding of how clusters form.” 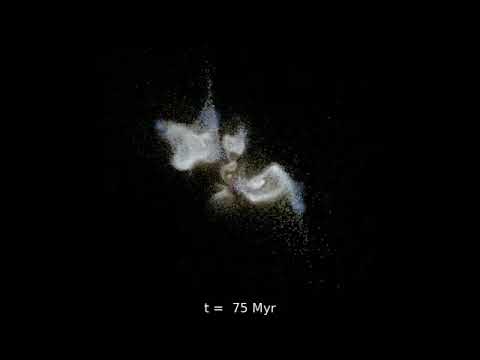 Astronomers report that the cluster must be incredibly dense to host that many stars and galaxies in such a (relatively) small space. It;’s like if you put all the planets in our solar system in the space between the Earth and the Moon, explains Dr. Axel Weiß, a co-author on the study.

The merging was originally detected in a wide sky survey using the South Pole Telescope. The objects surprised astronomers as they were closely packed together — they weren’t expecting something this spectacular. An additional study by the Atacama Large Millimeter/submillimeter Array in Chile provided clarity and revealed just what they had come across.

“It just hit you in the face because all of a sudden there are all these galaxies there,” says study co-author Scott Chapman, the Killam Professor in astrophysics at Dalhousie University in Halifax, Canada. “We went from three to 14 in one fell swoop. It instantly became obvious this was a very interesting, massive structure forming and not just a flash in the pan.”

All in all, the emerging cluster contains about 10 trillion suns’ worth of mass, and exhibits surprisingly high star formation rates: it churns out stars about 1,000 times faster than the Milky Way.

“There’s some special aspect of this environment that’s causing the galaxies to form stars much more rapidly than individual galaxies that aren’t in this special place,” says Hayward. One possible explanation is that the gravitational tug of neighboring galaxies compresses gas within a galaxy, triggering star formation.

So, what has the cluster been up to in the past 12.4 billion years? Well, astronomers believe this protocluster is a precursor to the larger and more mature galaxy clusters we’ve observed in more modern parts of the universe. By now, the cluster may very well look like the so-called Coma Cluster — a large cluster of galaxies that contains over 1,000 identified galaxies. By now, researchers say, the coalesced cluster may have grown to the mass of 1,000 trillion suns. If that’s not enough to make you feel incredibly small, then I don’t know what is.