As it turns out, zombies are not really only science fiction. Just a while ago I was telling you about a species of fungus that can turn ants into zombies, and how life on Earth may have actually originated from some ‘zombie aliens‘. Recently, researchers from the Natural History Museum in London have found evidence of millimetre-wide Osedax worms, which have never before been discovered in the Mediteranean. 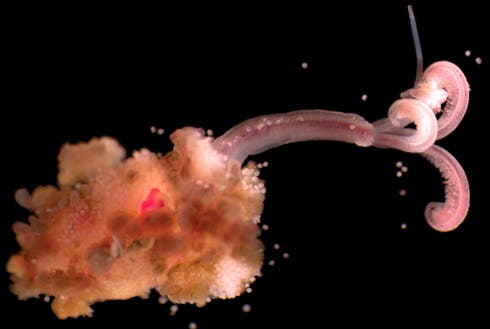 Osedax worms, which means “bone-eating” in Latin have only been found in the Pacific off the coast of Washington state in the US and in the Atlantic off Sweden; until now, that is. Researchers are positive that they have found clear signs of Osedax ‘boreholes’ in a whale fossil; these zombie worms are one of scores of organisms which are provided for when whales die. Basically, when a whale dies, a whole new small ecosystem is formed, that literally feeds on the whale’s nutrients.

“Fossils of worms are really rare. We don’t know a lot about their fossil record because they’re soft animals,” he said. “But, because these particular worms leave characteristic borings, we can trace them.”.

These worms are quite interesting organisms; they totally lack a mouth or intenstines, and instead they infiltrate the bones with some root-like organites to extract food. The findings can be found in Historical biology.