by Mihai Andrei
in Biology, Studies
Reading Time: 3 mins read
A A
Share on FacebookShare on TwitterSubmit to Reddit 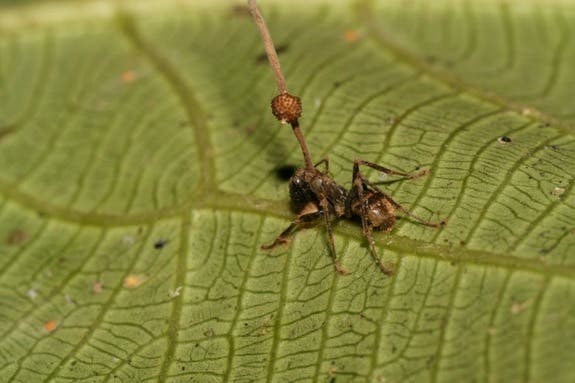 New amazing yet gruelsome details have emerged, regarding how a fungus can control an unfortunate ant. Basically, the fungus infects the ant’s brain, and then tells it what to do, in a somewhat similar fashion to what a Goa’uld would do.

Venturing deep in the Thai forest, researchers have found a species of fungi, Ophiocordyceps, which spreads its cells into the ant’s brain, thus forcing its muscles to grab a leaf (or something else) when, where and how the fungus wants it. They also force the ant to wanter around in a drunken fashion until it clamps its jaws on the underside of a leaf in what can only be called an ant zombie graveyard.

By studying 16 infected ants, researchers concluded that their last bites take place around noon, indicating they are synchronized with a sun-related cue, such as temperature or humidity.

“Synchronized arrival of zombie ants at the graveyards is a remarkable phenomenon. It adds a layer of complexity on what is already an impressive feat,” wrote David Hughes, a study researcher from Pennsylvania State University, in an email to LiveScience. “However, although ants bite at noon they don’t in fact die until sunset. Likely this strategy ensures (the fungus) has a long cool night ahead of it during which time it can literally burst out of the ant’s head to begin the growth of the spore-releasing stalk”. 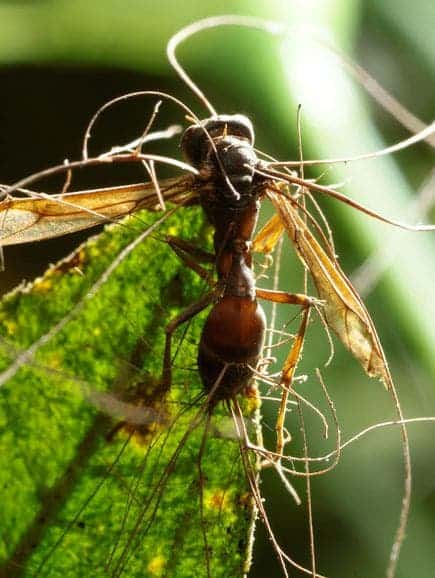 It is indeed an awful fate for the ants, who usually live in the canopies of trees, but occasionally come to the ground, where they contact the fungus. Scientists observed a total of 42 infected ants, which unlike healthy ones who walk in zig zag trails, wander around aimlessly, until they finally take their last bite. They dissected a few, and found that while holding on to the leaf with the death grip, their heads are filled with fungal cells and the muscles which operate the ant’s jaw were atrophied.

“In the context of biting, it allows the mandibles, we feel, to work in one direction and one direction only,” Hughes said. “Normally, they open and close, but in this case they can only close.”

This keeps the ant from loosening its grip or dropping the leaf. Another thing the fungus does is suck all the calcium from the ant’s muscles, causing a condition similar to rigor mortis. It’s not the only time researchers have seen fungus behave in this mind controlling way; they have also seen fungus manipulating arthropodes, crickets, bees, wasps, and even spiders.

“We are quite confident we could see this and similar phenomenon across a broad range of organisms, because it is such a neat evolutionary trick if you are fungus to use the muscles of an animal to transport you to another environment,” he wrote. (Many fungi rely on wind or other means to passively disperse their spores.)

All in all, it’s an extremely unfortunate fate for the ants, but a valuable source of information for researchers, who are just starting to learn about this sort of interaction.