A giant platypus fossil, measuring more than 1m long (3ft) was discovered in Queensland, Australia. The animal lived 5-15 million years ago, as paleontologists explain in the journal Vertebrate Paleontology. Until now, the oldest fossil was dated 100.000 years ago. 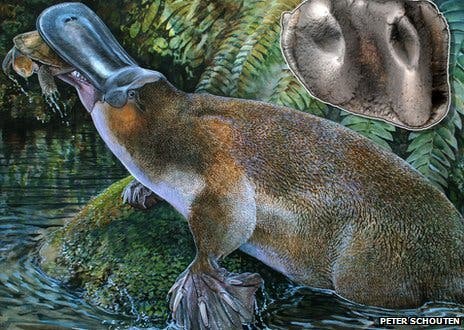 As if the evolutionary status of the platypus wasn’t extraordinarily complicated as it is, this finding adds even more complexity to the issue. The platypus is a frequent subject of research in evolutionary biology. In 2004, researchers at the Australian National University discovered the platypus has ten sex chromosomes, compared with two (XY) in most other mammals (for instance, a male platypus is always XYXYXYXYXY). Prof Mike Archer, from the University of New South Wales believes this fossil highlights an entire branch of their family tree that we previously knew nothing about.

“Suddenly up pops ‘playtpus-zilla’ – this gigantic monstrosity that you would have been afraid to swim with. “It indicates there are branches in the platypus family tree that we hadn’t suspected before.” 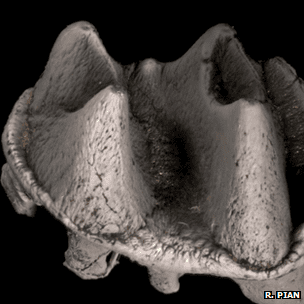 Interestingly enough, all that remains today from the fossil platypus is a single tooth – yep, paleontology is just this advanced and this good – all this information can be derived from a single, fossilized tooth. Not only did paleontologists figure out that they were dealing with a new species of platypus, two times bigger than the one that lives today, but they also figured out that it usually fed on crustaceans, turtles, frogs and fish. However, it’s still impossible to know exactly how it looked like.

“I guess it probably would have looked like a platypus on steroids,” said Prof Archer.

Platypus fossils come in very short supply, and researchers are forced to work with limited information, relying on assumptions more than facts. But this fossil shows us a bit of the larger picture.

“We have been naively led to suspect that maybe it was just one lineage of strange animals bumbling its way through time and space at least for the last 60 million years. The discovery of this new one was a bit of a shock to us. It was a wake-up call that the platypus’s story, the more we know about it, is increasingly more complicated than we thought.”

Hopefully, as more fossils are discovered in Australia, we will be able to find out more about these unique, enigmatic animals.