by Mihai Andrei
in Biology, News
Reading Time: 2 mins read
A A
Share on FacebookShare on TwitterSubmit to Reddit

OK, wasps are nothing to joke around with. They are the scumbags of the animal kingdom – they’re always up to no good. The thing is, they’re really good at being up to no good! After all, they used to grow in dinosaur feces, and they’ve been around for over 100 million years – more than many popular dinosaurs (yes, I’m looking at  you, T-Rex), so they must be doing something right. Now, researchers have captured footage of parasitic wasps which have developed a zinc-tipped drill-like needle for laying eggs in fruits.

Since they are larvae, wasps are killing other things. That’s because they just don’t lay their eggs in random fruits – they choose fruits which already have been impregnated with the offspring of other insects; their larvae will then feed on the larvae of the other insects and develop in the relative safety of the fruit. In the video, we see a wasp penetrate the fruit in order to lay their eggs inside. 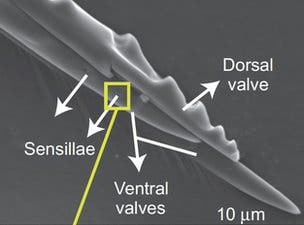 Interestingly enough, wasps could actually be useful for once – lead researcher Dr Namrata Gundiah believes the technique they use to drill inside fruits can be used to perform microsurgery:

“She uses her ovipositor… pushing this needle inside [the fruit] at the location, where she has decided to lay her eggs. She has to test the chemical environment inside the fruit as she’s doing this, and she wants to complete this process fast, because as you see in [our] video, there are predators nearby waiting for her.”

To see how the wasp managed to complete this demanding task, the team used an electron microscope to take pictures of the insect’s egg-laying appendage, or ovipositor. Taking measurements, they found that it was enriched with zinc, but only at the teeth like structures – which indicates that it serves a specific purpose. Their study shows the presence of zinc at about 7% by weight at the serrated edges.

“So we think the zinc is there to harden the tips.”

But even if in the end, it doesn’t provide any useful information for surgerey or other applications, it’s still awesome to see how nature ticks.

“In the end though, it’s the fun of seeing how nature works, rather than finding a utilitarian value for it. I’m sure if we look at it long enough, there will be lots of applications that will emerge just knowing how things work in nature.”