by Mihai Andrei
in Biology, Offbeat
Reading Time: 1 min read
A A
Share on FacebookShare on TwitterSubmit to Reddit

If you’re a Simpsons fan, then you problably know about blinky, the three eyed fish found near the nuclear plant where Homer Simpson was working. As it turns out, the Simpsons were right yet again, as fishermen in Córdoba, Argentina caught a three-eyed wolf fish in a reservoir fed by a local nuclear power plan. 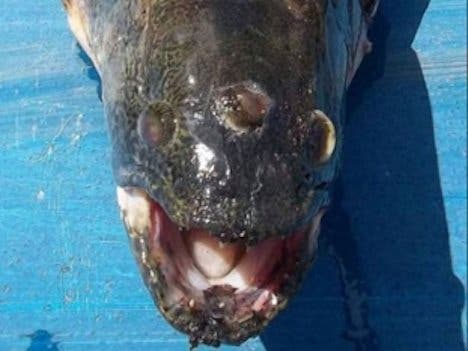 As, sadly, life once again imitates cartoon, it seems this discovery will pretty much hinder the plant’s owner’s attempt to run for local office. According to Infobae (you have to brush up on your Spanish to read it), people fishing there have become more and more worried that there might be some sort of pollution (doh) that might cause harmful mutation; well, there’s little left to say after finding a fish with an extra eye.

“We were fishing and we got the surprise of getting this rare specimen. As it was dark at that time we did not notice, but then you looked at him with a flashlight and saw that he had a third eye,” said fisherman Julien Zmutt of his unusual discovery.

Well, not much more we can say here… just that maybe it would be a good idea to stop fishing in nuclear dump sites.