For most insects, going beneath the water surface would be suicide -- but not for these flies!

For most insects, going beneath the water surface would be suicide. But for these flies in California’s Mono Lake, it’s a walk in the park. They use protective air bubbles to protect their bodies using a phenomenon called superhydrophobicity.

More than a century ago, as he was traveling through America, Mark Twain discovered an unusual phenomenon at Mono Lake, just to the east of Yosemite National Park. He witnessed large group of black flies dipping into the lake, documenting it in his travel memoir “Roughing It.”

“You can hold them underwater as long as you please — they do not mind it — they are only proud of it. When you let them go, they pop up to the surface as dry as a patent office report.”

What Twain observed wasn’t just a quirk of nature, it was an impressive and complex interaction between the chemicals in the water and those inside the flies, researchers report.

Mono Lake is an unusual place. It’s three times saltier than the ocean and about as basic as ammonia. Yet even this inhospitable environment houses some species, including shrimp-eating black flies. Alkali flies, Ephydra hians live along the shores of the lake and walk underwater, encased in small air bubbles for grazing and to lay eggs. Scientists have been wondering for a long time how they manage this impressive feat and now, they’ve finally found the answer.

Caltech biologist Michael Dickinson teamed up with Floris van Breugel (now at University of Washington) to study these flies, not only because they dive underwater, but also because they are a crucial part of their local ecosystem.

“Mono Lake has a very delicate and unique ecosystem,” says van Breugel. “Conservationists have fought hard to prevent its loss. We were interested in the Mono Lake flies not only because their behavior is so unusual, but because they are a crucial species for the lake’s ecosystem and food web. Mono Lake flies are a crucial component to the local ecosystem, acting as a food source for spiders and for migratory and nesting birds.”

The briny water actually creates the perfect conditions for flies to go beneath the surface. No fish live in Mono Lake, but algae, bacteria, and shrimp are quite abundant. For flies, this means that there are no predators, but there’s a lot of available food. However, flies need to overcome a big obstacle: surface tension. 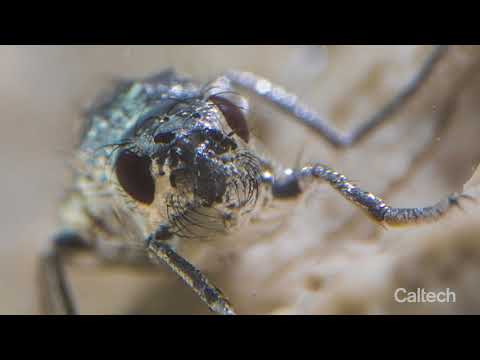 Surface tension is the property of a fluid to resist an external force, due to the cohesive nature of the water molecules.

It’s hard to directly experiment surface tension with our human bodies — being so big and dense, once we go into the water, we just sink. But for flies, that’s a different story. Flies are so light that they can actually float on water, due to the surface tension. To a fly, water is dense, sticky, and very hard to penetrate and evade. So the blackflies developed two unique adaptations to overcome these problems: they’re very hairy, and they’re covered by a waxy substance that is as repellent as paraffin. This substance makes the flies hydrophobic — it repels water. This allows them to stay dry, making the flies able to defeat the surface tension and escape the water. The hair also helps by repelling the carbonate-rich water, and the flies also have large claws which allows them to crawl underwater rocks while resisting the naturally buoyant force of the bubble.

Dickinson and Bruegel set up an experiment, plunging unfortunate flies into different wet surfaces, testing the blackflies’ ability to escape such environments and comparing them with the performance of other, closely related flies. They found that no other fly has the same ability. Furthermore, when they rinsed the blackflies with a solvent (hexane) to dissolve their wax, they lost their ability to form a superhydrophobic bubble suggesting that the wax is essential in the process.

Researchers believe that many other fly species might have had this ability, but they lost it because there was simply no motivation to keep it. Going underwater is tiring and risky, as fish can easily gulp you out. The one thing which encouraged Lake Mono’s blackflies to continue was the absence of fish.

“It’s not that Mono Lake flies have evolved a new and unique way of remaining hydrophobic–it’s that they’ve amplified the normal tools that most insects use,” says Dickinson. “It’s just a killer gig. There’s nothing underwater to eat you and you have all the food you want. You’ve just got to dive in perhaps the most difficult water in which to stay dry on the planet. They figured it out, and so get to enjoy an extremely unique life history. It’s amazing how the evolution of such small-scale physical and chemical changes can allow an animal to occupy an entirely new ecological niche.

Still, the questions of Why and How still linger. Researchers say their work answers one question but opens up even more.

“We could go in the materials science direction and study the chemistry of the waxes that the insects use,” he says. “But there’s also some really interesting neurobiology–it is such an incredibly weird thing for a fly to deliberately crawl underwater.”