Iridescence and superhydrophobicity combined on graphene

by Mihai Andrei
in Physics, Research, Technology
Reading Time: 2 mins read
A A
Share on FacebookShare on TwitterSubmit to Reddit

Graphene is starting to show its really interesting and exciting properties; recently, scientists have managed to put together two separate properties which usually don’t go together: it is iridescent like a butterfly’s wing, and superhydrophobic, like a rose petal or this material. 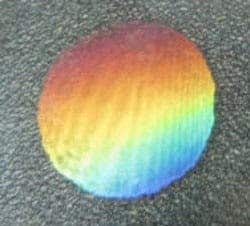 The engineered surface could have applications in liquid transportation and analysis, or due to graphene’s remarkable electrical properties, even in electricity. Jian-Nan Wang and coauthors from Jilin University in Changchun, China, achieved these properties by creating a microscopic texture on the graphene oxide’s surface; basically, by using two different lasers, they created an interference pattern that burned a tiny model on the material, resulting in this hue-like appearance. The tiny created grooves form ordered periodic structures which act as diffraction gratings that split light into its basic wavelengths.

Researchers observed that this model also causes graphene to exhibit adhesive superhydrophobicity – a really weird property. When they poured water on the surface, it merged into nearly spherical droplets, which remained just barely in contact although they were remained on the surface even when held upside down – still just barely.

Scientists predict that the combination of these two properties on one surface could have applications in microfluidic devices, for transferring small amounts of liquid in a controlled way. It is becoming more and more clear that graphene is starting to show off some of the remarkable thing it can do.