Don't get your party hats out.

by Alexandru Micu
in Science
Reading Time: 3 mins read
A A
Share on FacebookShare on TwitterSubmit to Reddit

It’s overshoot day, everyone! Don’t crack open a beer and definitely don’t put a turkey in the oven because this day marks the point when humanity officially uses up all the resources that Earth can regenerate in a year. And this year it falls on August 8, five days earlier than in 2015, meaning we’re burning through our resources in less time than ever before.

The date of Earth’s Overshoot Day is calculated by the Global Footprint Network each year, based on data from thousand of economic sectors (fisheries, forestry, or energy production for example) from the UN. The idea is that everything we consume past overshoot day is putting a strain on Earth that the planet can’t recover from.

Imagine the whole of Earth’s resources as being a lake 100 liters deep, receiving 10 liters of water each year. Each year, humans draw water from the lake and after we take 10 liters (that feed into it each day), we start consuming from the initial 100 liters — so the lake gets smaller and smaller every day.

Overshoot day marks the moment we’re past the 10 liters mark in this analogy. It’s important to note that when the GFN says “resources,” they don’t mean just water, land, and food – but also things like carbon storage, meaning any new CO2 we pump into the atmosphere this year can’t be reabsorbed by forests and oceans.

“Carbon emissions are the fastest growing contributor to ecological overshoot, with the carbon footprint now making up 60 percent of humanity’s demand on nature,” a press release from the Global Footprint Network explains.

What’s more worrying is the speed at which our consumption rate increases. The GFN calculated Earth’s overshoot day all the way back to the 1960s, and found that up to the ’70s, we were only using resources that could be sustainably reproduced. In 1961 humanity only used three-quarters of annual resources. In 1970, we’ve burned through them by December 23rd. Today, we’re barely through two-thirds of the year. 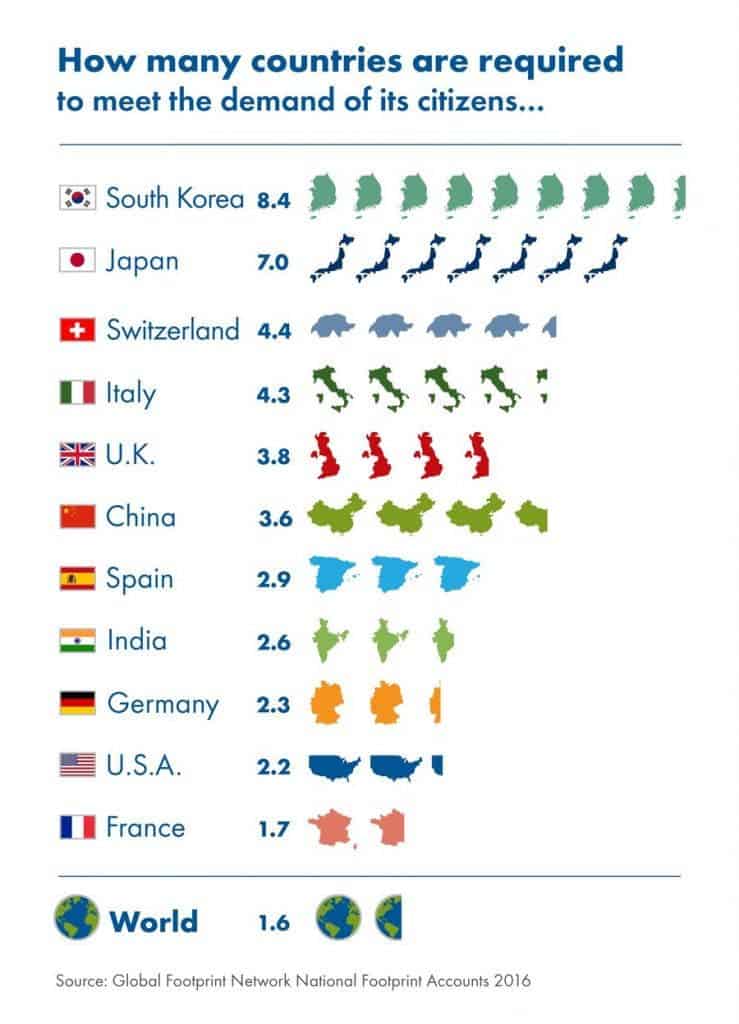 The rate of advancement of Earth Overshoot Day is gradually slowing down, however. Since the 1970s, Earth Overshoot Day has moved an average of three days earlier per year. Over the past five years, it’s slowed to less than one day a year. This comes down to both efforts of limiting our use of fossil fuels, which take a huge toll on the planet, but also efforts to limit consumption and waste.

In many countries, renewable energy is cheaper than fossil. Costa Rica managed to power the entire country with 100 percent renewables for 75 days in a row last year, and Germany was powered by 95 percent renewable electricity last year. Portugal was able to run for four straight days without any fossil fuels. China committed to reducing its citizens’ meat consumption by half up to 2030, which would amount to 1 billion tonnes of CO2 emissions. We’re also seeing programs meant to reduce single-use plastic items usage and waste, backed by both governments and private companies.

There are still significant challenges ahead – namely the fact that Earth’s population is expected to swell to 11.2 billion by the end of the century – but we’re slowly, slowly reducing our toll on the planet.

Maybe next year will become the first year in more than four decades that we push that overshoot date back a few days.