‘Supermoon’ spectacle will lightup the sky on Saturday night

by Tibi Puiu
in Astronomy, Remote sensing, Space
Reading Time: 3 mins read
A A
Share on FacebookShare on TwitterSubmit to Reddit
ADVERTISEMENT
ADVERTISEMENT 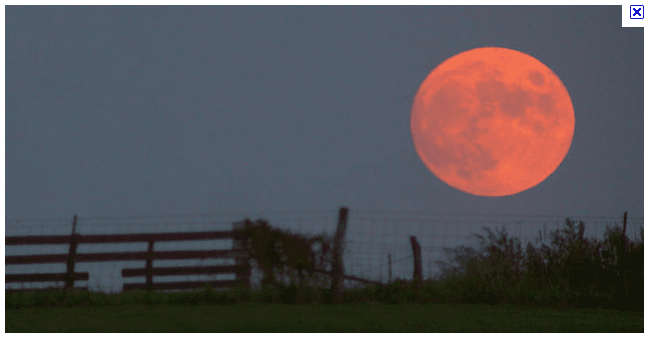 Romantics and astronomy aficionados alike (much of the same aren’t they?) will rejoice as this Saturday a rare spectacle of the moon will occur when it will come around closest its been to the Earth in 18 years! Much like planetary movement, Earth natural satellite movement is an ellipse, meaning it has points where its closer to the planet, called perigee, and farthest, called apogee.

This Saturday, on March 19, the moon will be at its closest point to our planet in 18 years — a mere 356,577 kilometers away. During this time, anyone will be able to see it 14 per cent bigger and 30 per cent brighter than lesser moons that occur on the apogee side of the Moon’s orbit. The phenomena bares the name “supermoon”, a term coined by astrologer Richard Nolle back in the 1970s. The term is used to describe a new or full moon at 90% or more of its closest orbit to Earth. Saturday night, it will be at 100%.

‘The last full Moon so big and close to Earth occurred in March of 1993,’ said Geoff Chester of the US Naval Observatory in Washington DC.

Well worth it, indeed, seeing how its a spectacle of the rarest exhibition. We recommend you prepare yourselves for this by picking a viewing position which will allow you to see the moon next to the horizon, so that the “moon illusion” effect might occur. This is because your eyes will automatically compare it to the hills and houses nearby making it appear larger. 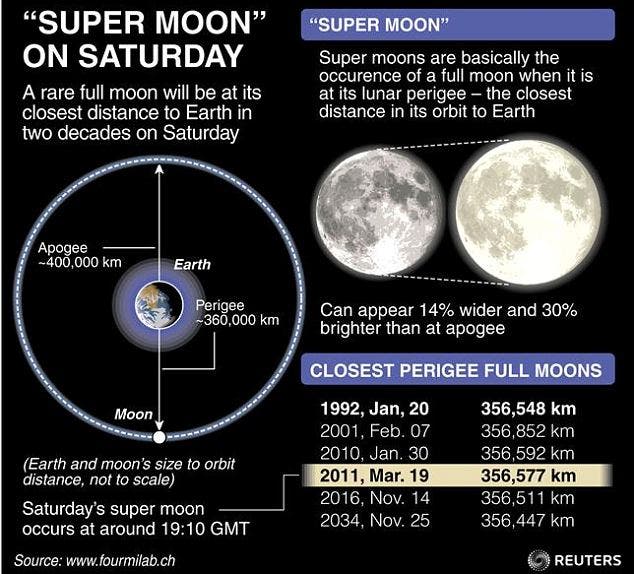 Professor Chester said: ‘The full Moon of March 19th occurs less than one hour away from perigee – a near-perfect coincidence that happens only 18 years or so.’

What’s sad is that there are still a lot of people who connect the moon with earthquake, tectonic movement or other natural disastrous, “crimes” of which the moon is perfectly innocent. Actually the man who named the event, Richard Nolle, warns Earth’s inhabitants via his website to prepare themselves during the “supermoon risk window,” which ranges from March 16 – 22. During this time, Nolle claims there will be an increase in supreme tidal surges, magnitude 5 or higher earthquakes, and even volcanic activity, which again is totally bogus.

There is absolute no scientific evidence out there demonstrating that the Moon has a decisive influence on plate tectonics. The natural effects this Saturday’s phenomena will pose is an increase in tide, which is absolutely normal, and a rare sight for the eye and spirit.

“The moon will be a little closer than it was last year, 1/4,000 of a percent closer,” sain Gordon Johnston, planetary program executive for NASA. “The distance between the Earth and the moon changes a lot in its orbit. Really the only change is that it appears bigger when it’s close. This coming full moon will be the brightest of the year.”

As for the theories purported by Nolle and other astrologers … well, Johnston hopes that people don’t take everything they hear at face value.

“We live in an age where information gets circulated around very quickly,” Johnston said. “So I would just say to do your research.”