Are you smarter than a Neanderthal ?

by Mihai Andrei
in Archaeology, Studies
Reading Time: 2 mins read
A A
Share on FacebookShare on TwitterSubmit to Reddit 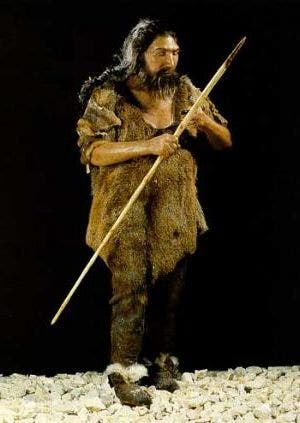 Usually, we tend to think of Neanderthals as being our bigger and stronger but not-so-intelligent cousins, but that may very well not be true; it has been shown on several occasions that Neanderthals were quite smart, and they could figure out a whole lot of things by their own, without immitating humans.

In recent years, it is believed that the Neanderthal tools were rough and simple, but that belief may very well be knocked down by some discoveries of thinner, blade-like stones, some of had having jagged toothed edges, while others had one sharp edge and a dull, curved back. These tools were pretty similar to those used by humans in that time, which led archaeologists to believe that Neanderthal culture was heavily influenced by human culture.

It may very well be possible, say, for a Neanderthal to use a hammer, for instance, but to build a hammer with his own mental means… that’s an entirely different story. This fact leads researchers to look upon them in a more favorable light, seeing them as an intelectual match for Homo Sapiens.

The first such discovery was in southern Italy, where the climate was harsh and variable, forcing Neanderthals to improvise on numerous occasions.

“There would have been an advantage to pause and develop new strategies,” said Julien Riel-Salvatore, lead author of the study, which was published last August in the Journal of Archaeological Method and Theory.

However, the major Neanderthal extinction is a well known fact, but these findings seem to indicate that even though they went exctinct, they did try to adapt to the changing climate and ecosystems, but this challenge was just too much for them. Still, why were humans able to survive, and Neanderthals not ? That is still a matter of debate, and probably will be for years.