Fossil hints at distant relatives of our ancestors, deepens mystery

Our family tree may be much more complex than we know – it may have sprouted some long lost branches which go back some 2 million years.

A team led by Meave Leakey, daughter-in-law of distinguished scientist Louis Leakey found facial and jaw bones from three specimens that led them to believe our human ancestors had plenty of company from different human-like species. The bones most definitely don’t come from our ancestor, Homo Erectus, and they most likely come from a distant cousin of Homo Erectus, with who they share the same ancestors.

But other archaeologists and anthropologists aren’t buying this theory: they believe it’s jumping to conclusions based on way too little evidence. Either way, this is a continuation of a long-running argument in anthropology about the earliest members of our own genus, or class, called Homo – a family tree which is becoming more messy and complicated.

The thing is, while these findings look drastically different from those of modern humans, they closely resemble an enigmatic, nearly complete skull found 40 years ago that paleoanthropologists have been trying ever since to fit into the family tree. To add even more drama to the table, that skeleton was found by the Leakeys as well.

The cradle of humanity

East Africa is though to be the seat of human origins, and at the time in which Homo Erectus began its ascension, it was “quite a crowded place with multiple species,” said Fred Spoor of the Max Planck Institute for Evolutionary Anthropology in Leipzig, Germany, a co-author of a report describing the finds. Homo Habilis (which means ‘handy man’) was another genus known for creating primitive stone blades. Another, more primitive species, Paranthropus bosei, also lived in the region at the time.

But the new finds, and the mystery skull, which may or may not be the same species, clearly don’t belong to any groups. The face is too flat, falling down like a cliff from brow to chin, while the teeth are straight instead of arching, like with Homo Erectus. The molars are also very large, and the brain was very big for the time, albeit it measured just half of that of a modern human. 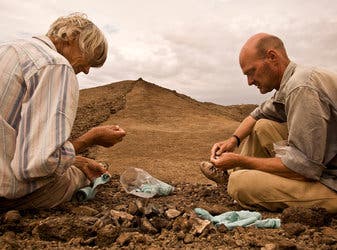 The mystery skull found 40 years ago may hold a key role in this controversy. The skull wasn’t given a name, and is only identified by a number – KNM-ER 1470. In the 40 years since it was found, members of the Leakey family, all involved in archaeology and anthropology, have been trying to find anything resembling it, but they have been unsuccessful – until now. Thus, a new spark flames the debate, between those who believe they are members of a new species, and those who believe the specimens are merely deformed examples of other, known, species.

“There just hasn’t been any evidence one way or another,” said Susan Anton of New York University, who collaborated with Meave Leaky in describing the new fossils.

Rick Potts, current director of Smithsonian Institution’s human origins program is firmly convinced that the new findings represent a new species. Potts, who was not involved in the study, added:

“There will still be controversy over what to call these things. The old picture of human evolution heading in a straight line — where an early species gave rise to a more advanced species and so on, until finally reaching modern humans — is all but defunct.”

“At the moment, all we’re doing is classifying heads,” said Bernard Wood, a paleoanthropologist at George Washington University who studied the mystery skull in the early 1990s and declared it likely represented a new species. “It will be a different ballgame when we can match heads with limbs. There are limb bones, but with no heads.”

It’s still unclear if these species interacted with each other, or even more, if they interbred.