Ancient human tool use much earlier than thought!

Humans might have started using sophisticated tools some 1.76 million years ago, much earlier than previously believed. This has been suggested by the discovery of hand axes from that period which belong to the complex Archeulean culture. This could also change what we believe about the period when humans started leaving Africa. 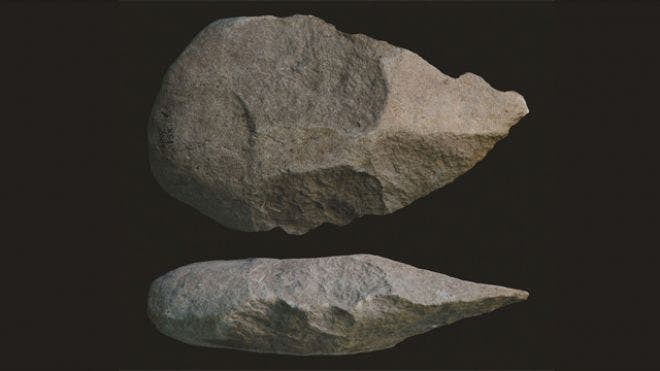 Anthropologists consider the Acheulean hand axes to be the culture of our ancestor Homo erectus, and we know H. erectus first evolved around 1.8 or 2 million years ago,” study researcher Christopher Lepre, of Columbia University, said. “I think most researchers were anticipating that older stone axes would be found.” And now they’ve found them.

Several of these hand axes belonging to the Archeulean were found; they were built from chipped volcanic rock from a nearby stream, were found at a site on the shore of Lake Turkana in Kenya. They found that the axes have different levels of sophistication – for that period, that is.

“There’s not a tremendous amount of diligence that goes into making the Oldowan tools, you can say they are kind of haphazardly made,” Lepre said. “It’s pretty simple in terms of the makers were bashing stones together to make sharp edges.”

The data indicates that there were at least 2 tool-using hominids living in Africa 1.76 million years ago, but what’s still a mystery is how these tools left Africa, because the Archeulean culture and their tools didn’t leave Africa until about 1 million years ago, and it is currently believed that Homo Erectus colonized Europe 1.5 million years ago.

This could mean two things: either that the Homo Erectus that migrated to Europe didn’t develop Archeulean technologies for half million years, or that Homo Erectus wasn’t the species who created those axes at all. They could have been developed by the lesser evolved Homo habilis. Either way, so far, something doesn’t seem to add up.