by Mihai Andrei
in Anthropology, Archaeology

Modern humans started ‘replacing’ Neanderthals some 40.000 years ago, and for a long time, it was thought this came as a result of the more advanced human intelect and a better ability to adapt; but as more and more studies unfold, the Neandertals’ capabilities are still greatly debated. Many scientists now argue that Neandertals had cultural capabilities similar to modern humans, and in some ways, were even intellectually superior. 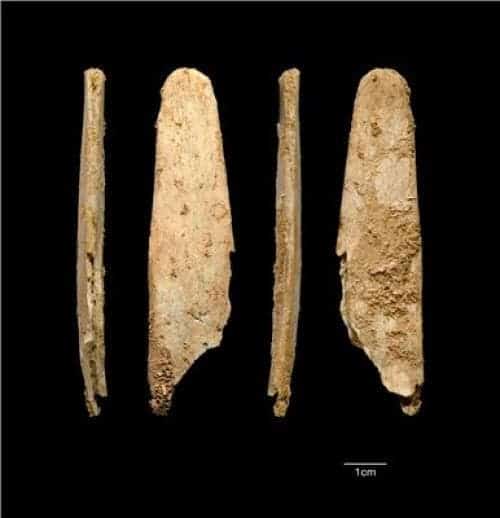 Such may be the case with these bone tools – it may not be that humans taught Neanderthals how to develop them, but the other way around.

“For now the bone tools from these two sites are one of the better pieces of evidence we have for Neandertals developing on their own a technology previously associated only with modern humans,” explains Dr. Shannon McPherron of the Max Planck Institute for Evolutionary Anthropology in Leipzig, Germany. He and Dr. Michel Lenoir of the University of Bordeaux have been excavating the site of Abri Peyrony where three of the bones were found.

Usually, whenever we find something from that period, it is either developed by humans or by humans and Neanderthals at the same time – this is a rare occasion when the roles have been reversed. The possibilities this discovery suggests are quite interesting.

“If Neandertals developed this type of bone tool on their own, it is possible that modern humans then acquired this technology from Neandertals. Modern humans seem to have entered Europe with pointed bone-tools only, and soon after started to make lissoir. This is the first possible evidence for transmission from Neandertals to our direct ancestors,” says Dr. Soressi of Leiden University, Netherland.

She and her team found these bone tools at the French site of Pech-de-l’Azé I.

But there is another possibility – that this was also a human achievement, but humans entered Neanderthal territory sooner than previously believed. While more unlikely, this is also possible; regardless, the significance of this discovery offers a whole new angle to Neanderthalean tools.