by Mihai Andrei
in Anthropology
Reading Time: 1 min read
A A
Share on FacebookShare on TwitterSubmit to Reddit

Our close cousins, the Neanderthals, were much more similar to us than we imagined even a decade ago, fascinating the scientific world more and more with each passing year; now, a new study suggests that they also had a type of speech and language, something which was once considered to draw the decisive lines between humans and all other species.

In their paper, which was published in Frontiers in Language Sciences, Dan Dediu and Stephen C. Levinson argue that modern language and speech can be traced back to the last common ancestor we shared with the Neandertals roughly half a million years ago. 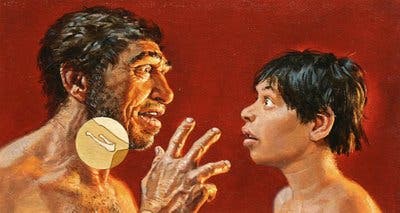 Recent paleontological and archaeological discoveries, combined with the great progress done in DNA sampling have shown that humans and Neanderthals shared much more in common than was believed, and far from being powerful brutes, they had cognitive abilities similar to our own.

If this is true, and Neanderthals had language and speech, just like humans at the time did, then this pushes back the origins of modern language 10 times further down history – from the approximately 50.000 years often quoted to 500.000 – 1.000.000 years ago.