by Mihai Andrei
in Anthropology
Reading Time: 2 mins read
A A
Share on FacebookShare on TwitterSubmit to Reddit

A new, controversial analysis of a skull suggests that Homo habilis, Homo rudolfensis and Homo erectus were in fact the same species, something which would force scientists rewrite a big page of anthropology. 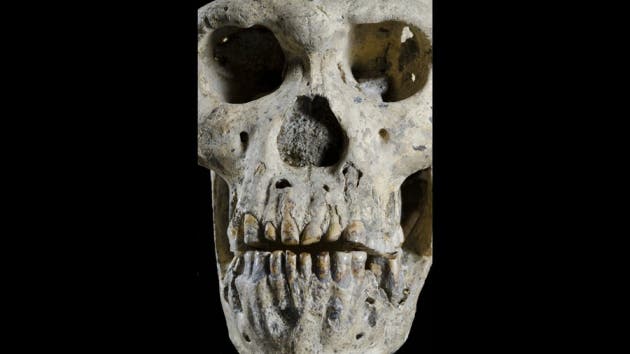 Researchers compared the anatomical features of the of a 1.8-million-year-old fossil skull with those of four other skulls from the same excavation site at Dmanisi, Georgia; the skull, informally named “Skull 5” is “the most complete skull of an adult from this date”. It’s very interesting to observe the differences between all the skulls found in the same place, from the same era:

“The Dmanisi skulls look quite different from one another”, Zollikofer says, “so it’s tempting to publish them as different species. Yet we know that these individuals came from the same location and the same geological time, so they could, in principle, represent a single population of a single species.”

Taking that theory and testing it with existing data, the statistics seem to add up.For example, the volume of skull 5 is only about 75% that of the largest skull unearthed at the Dmanisi site — a disparity that may seem large but that falls within the variation seen among modern humans and within chimpanzees. The variation also seems to fit within the range of previous findings from the same era.

“Like so many finds, [the skull] adds to what we know, but does not necessarily clarify or simplify things,” says Robert Foley, a paleoanthropologist at the University of Cambridge, UK. Nevertheless, he notes, the results of the new analysis must change the way scientists think about the nature and magnitude of anatomical variation in early Homo.

If the three species were in fact just one, then H. habilis and H. ruldofensis would be subsumed into H. erectus – but there’s a lot of criticism aimed at that idea. First of all, cramming the three species which inhabited an area (at least) from Africa to Indonesia seems a little far fetched. Fred Spoor, a palaeontologist at the Max Planck Institute for Evolutionary Anthropology in Leipzig, Germany is not convinced by this new theory. He believes that the statistical analysis used to study cranial differences are not relevant, and instead, researchers should have analysed pecific anatomical traits, such as the height of the braincase or the diameter of the eye socket, which are the most common characteristics used to frame species.