An artificial ‘skin’ can stretch up to 480 percent its original size, and can sense changes in pressure – a haptic feature that could lend both robots and human prostheses a sense of touch.

This artificial ‘skin’ can stretch up to 480 percent its original size, and can sense changes in pressure – a haptic feature that could lend both robots and human prostheses a sense of touch. The team behind the innovation reckon these features could improve human-robot interactions.  A robot might change color to fit the mood of the house in a given moment or use all of its surface area as one display. The robot can also use the tech to change shape.

Do these features sound familiar? That’s because the Cornell graduate students in charge of the projects mimicked octopuses, that have flexible skin and contain color changing cells. These animals can camouflage with frightening speed and effectiveness. Not nearly as impressive, the artificial skin developed at Cornell does a pretty good job for a proof of concept.

The students were led by  Robert Shepherd, a Cornell assistant professor of mechanical and aerospace engineering, who challenged them to come up with a new tech that can solve the inherent faults of rigid robotics.

“We can take these pixels that change color and put them on these robots, and now we have the ability to change their color,” Shepherd said. “Why is that important? For one thing, when robots become more and more a part of our lives, the ability for them to have emotional connection with us will be important. So to be able to change their color in response to mood or the tone of the room we believe is going to be important for human-robot interactions.”

The skin consists of a dielectric (insulating) elastomer sheet sandwiched between two  transparent hydrogel electrodes. When stretched, the  hyper-elastic light-emitting capacitor (HLEC), as it was dubbed, changes its luminescence and capacity.

[ALSO READ] The squishy bot revolution: how soft robotics is changing the field

To demonstrate potential applications, HLEC was used in a soft robot. Three six-layer HLEC panels were bound together to form a crawling soft robot, with the top four layers making up the lit skin and the bottom two the pneumatic actuators. The HLEC chambers were alternately inflate and deflated, and this pressure propelled the soft robot to a crawl. 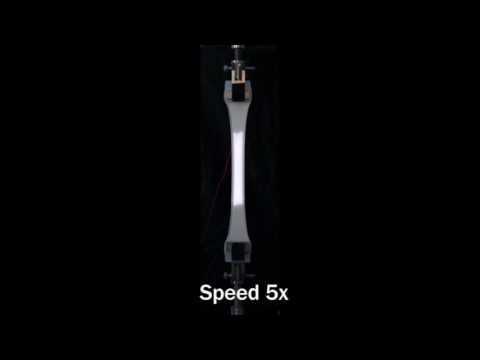 According to Shepherd there are two main directions this technology can take. Firstly, robots could become less awkward by changing color and shape. Robot-human interactions could also be improved since a human could use any surface of the robot like a touch-screen. Secondly, the tech could be employed to enhance human sensibility.

“You could have a rubber band that goes around your arm that also displays information,” said Chris Larson, a Cornell graduate student and one of the co-authors of the paper published in the journal Science. “You could be in a meeting and have a rubber band-like device on your arm and could be checking your email. That’s obviously in the future, but that’s the direction we’re looking in.”