It's obvious that automation will replace a lot of jobs in the coming decades, especially the low paying ones. A new report made at the White House assessed the likelihood of robots taking over jobs and broke it down by hourly wage.

by Tibi Puiu
in News, Technology
Reading Time: 3 mins read
A A
Share on FacebookShare on TwitterSubmit to Reddit
ADVERTISEMENT
ADVERTISEMENT

It’s obvious that automation will replace a lot of jobs in the coming decades, especially the low paying ones. A new report made at the White House assessed the likelihood of robots taking over jobs and broke it down by hourly wage.

The annual economic report addressed to the President suggests there’s an 83% chance automation will replace workers who earn 20$/hour or less; 31% for those that fall between $20 and $40; and 4% for hourly wages above $40 an hour. 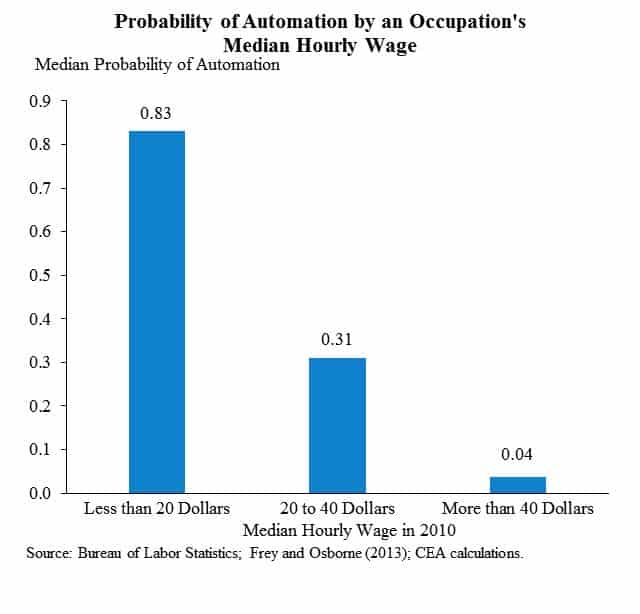 The findings echo those made by other researchers which suggest half of all U.S. jobs will be replaced by robots soon. Another study previously featured on ZME Science, found up to 87% of jobs in Accommodation & Food Services are at risk of automation, and even in some relatively skilled industries, such as Finance and Insurance, up to 54% of jobs could be displaced over the next decade or two.

Traditionally, innovation funnels more jobs and prosperity, although the paradigm shift meas obsolete jobs are superseded. The industrial age is a worthy example. Millions of jobs were displaced then in a myriad of fields by factories. The introduction of fast-paced and efficient assembly lines at the turn of the last century produced a new displacement. Massive globalization starting a few decades ago also caused millions of jobs in developed countries to be lost at the hand of outsourced cheap-labor in developing countries, mostly from Asia.

This time around, the pace of innovation and automation across all fields is unheard of. It’s very likely that many people will not have the resources to repurpose their skill sets. Even if millions of cashiers, for instance, would train to become engineers or doctors, there would not be enough room in the job market for them. We seem to be nearing a cusp, and the solution doesn’t seem obvious at this point.

Automating all these jobs means that products and services will become cheaper. In effect, automation should strengthen the economy, but only if the income people have today isn’t displaced in corporate profits and dividends at the hand of a few. For now, the only solution in 2050 to solve the foreseeable job crisis might be to implement a basic income. Some countries like Holland and Finland are experimenting with this scheme which says every citizen is given a monthly stipend that covers all the basic necessities of life with no strings attached.

What’s the chance your job will be taken over by a robot:
ShareTweetShare