Basic income in another Dutch town: each person receives up to $1,450/m unconditionally

After Utrecht, another Dutch town is joining the basic income social experiment to see whether receiving an unconditional sum of money each month will make society more productive or slacking

by Tibi Puiu
in News
Reading Time: 4 mins read
A A
Share on FacebookShare on TwitterSubmit to Reddit

After Utrecht, another Dutch town is joining the basic income social experiment to see whether receiving an unconditional sum of money each month will make society more productive or slacking.

The second city in Holland to join the experiment is Tilburg, a city numbering 200,000 inhabitants found near the border with Belgium. For now, however, only 250 people will participate in the pilot program which will see each person receiving a monthly check ranging from €900 ($1,000) to €1,300 ($1,450). It’s important to note that each participant is currently on welfare, but by being included in this program the previous welfare conditions don’t apply anymore. This means no meetings, no paperwork, no job hunting. Free cash each month, no strings attached.

Why would a government do this? Well, working just to support yourself is definitely not good for you, as a person, nor for society. A bad job is worse for your mental health than unemployment, and an unsatisfied employee is unproductive to a company and society. So, instead of flipping burgers to support yourself on minimal wage, you could stay home or go back to school, learn a new skill – something you can really be good at – then get back to work. Or you can just stay at home, cash in and exploit the system. This latter scenario is what gets most people to criticize the basic income initiative, which is why pilot programs like these in Utrecht or Tilburg are very important to follow. The aim is: will this make the city more productive or will it backfire? 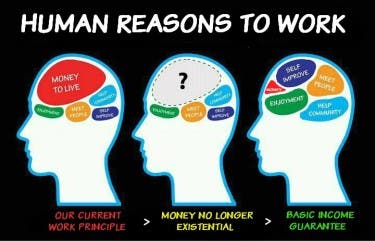 So far, there are reasons to believe the basic income works. A program ran in Ojivero-Omitara from January 2008 to December 2009 by the Namibia BIG Coalition found decrease in poverty, an increase in economic activity, reduced crime, reduced child malnutrition and increased school attendance as well as other positive effects after basic income was introduced. Two pilot programs launched in India (2010) resulted in an “increase in economic activity as well as an increase in savings, an improvement in housing and sanitation, improved nutrition, less food poverty, improved health and schooling, greater inclusion of the disabled in society and a lack of frivolous spending.”

As early as 1795, American revolutionary Thomas Paine called for a Citizen’s Dividend to all U.S. citizens for “loss of his or her natural inheritance, by the introduction of the system of landed property.” Napoleon Bonaparte echoed this liberal idea, being quoted as saying”man is entitled by birthright to a share of the Earth’s produce sufficient to fill the needs of his existence.” Today, there are some places where this has been applied – sharing dividends with the citizens. For instance, in Alaska, each citizen receives roughly $1,200 annually as a rightful share of the profit made from oil in the state. Far too little to live on, unfortunately.

The simple fact is that not all people have to work. Sure, most people work because they have to survive, but if working just for the sake of buying groceries and paying rent is put out of the equation what kind of progress could society see? It’s a highly interesting prospect, and yes I believe it could actually work. Moreover, a couple of decades from now it will have to work. As more and more tasks and skillsets become automated, as many as half of all current jobs will disappear in the coming decades. Many will get new jobs – jobs that don’t exist yet,  not at a mainstream level at least – but most won’t have the time to re-purpose their skill set. In a recent interview, this is what Edward Snowden thought of this particular issue:

“As a technologist, I see the trends, and I see that automation inevitably is going to mean fewer and fewer jobs. And if we do not find a way to provide a basic income for people who have no work, or no meaningful work, we’re going to have social unrest that could get people killed. When we have increasing production—year after year after year—some of that needs to be reinvested in society. It doesn’t need to be consistently concentrated in these venture-capital funds and things like that.”

But until our robot overloads take over, who’s going to flip burgers, serve meals, drive the school bus and so on if everybody has a basic income? Well, people will still want to get a job because: a) contrary to what most would think (hey, even you), people actually get bored and want careers and b) the basic income will be designed to cover your minimal expenses; if you want to party each weekend, travel or buy gadgets you’ll still have to find a job. It’s just that, with a basic income you don’t have to stress that you’ll end up on the streets or that you don’t have anything to put on the table for your kinds the next day. Poverty hurts.

In all event, it will be very interesting to follow events in Holland. Soon, the cities of Groningen, Maastricht, Gouda, Enschede, Nijmegen and Wageningen might also join.