US waters have a new guardian – the tuna robot

This might sound hilarious, but the Department of Homeland Security takes no humor when US waters are concerned. Collaborating with Boston Engineering Corporation’s Advanced Systems Group, the DHS science division have created a tuna inspired robot designed for versatile maneuvrability in harsh conditions, like tumultuous waters and crammed ship tanks.

Called the BIOSwimmer, the tuna robot can swim inside the interior voids of ships such as flooded bilges and tanks, and report back if something’s fishy. Of course, harbors and piers will also be fitted with this latest surveillance technology. I’m not sure if the US officials are counting on blending it with tuna banks, but even on its own, in all seriousness, the BIOSwimmer looks pretty capable. 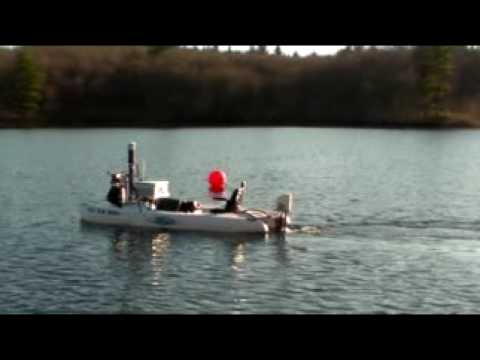 Check out this video below, where the BIOSwimmer is featured and described in short. Good stuff starts from the 2:17 mark onwards.

“It’s all about distilling the science. It’s called ‘biomimetics.’ We’re using nature as a basis for design and engineering a system that works exceedingly well. Tuna have had millions of years to develop their ability to move in the water with astounding efficiency. Hopefully we won’t take that long,” said David Taylor, program manager for the BIOSwimmer for DHS S&T’s Borders and Maritime Security Division.

via Science, Space and Robots.