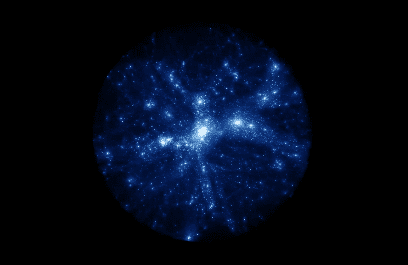 Astronomers at  UC Santa Cruz have set  a new benchmark for cosmological research for decades to come maybe, after successfully simulating the forming of distant galaxies, like our very own Milky Way, under the mysterious forces of dark matter and dark energy.

Named Bolshoi – for the Russian word meaning “grand” or “great” – the simulation’s results are on par with what astrophysicists have theorized for years, confirming the current models which try to explain how the “Big Bang” sparked the origin of the subatomic particles and galaxies that populate our expanding Universe. This extraordinary feat was reached after more than four years of hard work and with the help of the invaluable Pleiades supercomputer at NASA‘s Ames Research Center in Mountain View – one of the most powerful computing unit in the world.

“In one sense, you might think the initial results are a little boring, because they basically show that our standard cosmological model works,” physics Professor Joel Primack said in a university release Thursday. “What’s exciting is that we now have this highly accurate simulation that will provide the basis for lots of important new studies in the months and years to come.”

Anatoly Klypin, an astronomer at New Mexico State University, wrote the computer code that produced it, Primack said. He went on to say, the simulation will provide astronomers around the world with new guides for observing and describing the most distant galaxies that telescopes can see.

The simulation is based  on a “map” of the early universe that was created nearly 10 years ago by a satellite called the Wilkinson Microwave Anisotropy Probe, or Wmap. The afformentioned probe captured a faint microwave echoed by the long forgoten Big Bang, now calculated to have occurred 13.7 billion years ago, and has since then provided invaluable data for various models, simulations or Universe maps.

The simulation traces the evolution of large-scale structures in the universe, and reveals how “halos” of dark matter, still covered in mystery to scientists,  surround all the known galaxies to provide them with the gravity that holds them together.

“We know that the dark matter exists, but we still don’t know exactly what it is, yet it’s essential to explain the evolution and structure of all the stars and all the galaxies,” Primack said in an interview.

Astronomers have calculated that dark matter accounts for something between 75 and 82 percent of all the matter in the Universe. The rest is the ordinary matter that makes up everything else in the Universe, protons and neutrons for the atoms that form our surroundings, from star dust to burgers.

The initial release of data from the Bolshoi simulation began in early September.

“We’ve released a lot of the data so that other astrophysicists can start to use it,” he said. “So far it’s less than one percent of the actual output, because the total output is so huge, but there will be additional releases in the future.”

One can only wonder how these simulations and theories can be taken into effect if Einstein’s theory of relativity is wrong. More videos related to the Balshoi simulation depicting dark matter and energy halos can be seen on the UCSC’s website.