by Mihai Andrei
in Oceanography, Research
A A 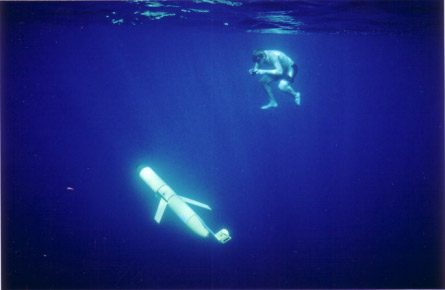 This sounds truly great, and I was quite surprised to see it, but it’s a reality. Scientists invented the Prius of ocean-going submersibles — a new “green” robotic glider that runs on energy absorbed from the heat of the sea, rather than batteries. This is one of the best ways of achieving energy.Another thing which makes scientists glad is that it can stay twice as long underwater as its predecessor, which used battery power. It is in fact the first autonomous underwater vehicle to travel great distances for extended periods running on green energy. This type of submersibles achieved world wide fame when WHOI’s remotely-operated underwater vehicle, “Argo,” discovered the wreck of the RMS Titanic near Newfoundland. (No, Leonardo di Caprio was not there.)

This robot was built by the Webb Research Corporation in Falmouth, Mass., and it has traveled between two of the U.S. Virgin Islands, St. Thomas and St. Croix more than 20 times. With the achieved data, scientists are going to study the currents in that area. To power its propulsion, the submersible gathers thermal energy from the ocean. What happens is that when it moves from cooler water to warmer water, its internal tubes of wax are heated up and expand, pushing out the gas in surrounding tanks and increasing its pressure. These compressed gases, much similar to a spring, are used for propulsion.

“This glider allows longer missions than previous [battery-run] versions,” said Ben Hodges, a physical oceanographer at WHOI. “It could be out there for a year or two years. None of the old ones could go beyond six months. And producing fewer batteries is good for the environment.”

Gliders are also the best way to study undersea environment and to perform long underwater journeys that humans can’t make.

“They can be very helpful in getting measurements that would be too expensive to get otherwise — any kind of study that requires long-term measurements from multiple locations,” Hodges told LiveScience. “If you had to be there in a ship, it would cost millions of dollars.”