by Tibi Puiu
in Science, Studies
Reading Time: 3 mins read
A A
Share on FacebookShare on TwitterSubmit to Reddit
ADVERTISEMENT
ADVERTISEMENT

The Yellowstone super volcano, which basically outlines the whole Yellowstone National Park, is part of one of the most active volcanic regions in the world. A recent research conducted by a joint team of international scientists from Washington State University and the Scottish Universities Environmental Research Centre is set to cast doubts on the frequency of eruptions and, most importantly, super eruptions from the Yellowstone area, which the team found to be more frequent than previously thought. 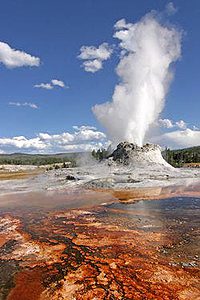 Yellowstone’s many attractions include geysers, such as Old Faithful, and hot springs, which have been formed, it is believed,  a result of the giant pool of magma that Yellowstone sits on. Beyond its serene and truly beautiful status today, Yellowstone is one of the most dangerous patches on Earth. Its largest eruption took place some 2.1 million years ago, and in the subsequent spew of lava and ash over half of the United States was covered in a dark shroud blocking sun light, and reaching areas of as far away as Texas, Louisiana and southern California, according to the U.S. Geological Survey.

“That got us thinking whether these things were representing different magma batches [from a single eruption] or different events,” said study leader Ben Ellis, a volcanologist and postdoctoral researcher at Washington State University.

The team lead by Ellis analyzed rock samples from all three layers using the latest isotope dating techniques, involving the potassium 40 and argon 40 isotopes. Like a geological clock, the technique helps dating samples and have a precision of 0.2 percent. Darren Mark, study co-author at the Scottish research center, recently helped fine tune the technique to improve it by 1.2 percent. Apparently, the uppermost layer of lava was deposited some time later than the other two, hinting that a second eruption took place.

The team of researchers claim that the super eruption, which formed  massive volcanic depressions known as “calderas“, most famous of which being Huckleberry Ridge, actually took place in two different eruptions at least 6,000 years apart. The first eruption generated 2,200 cubic kilometers of volcanic material, while the second, smaller eruption generated 290 cubic kilometers. As a measure of comparison, the infamous Mount St. Helens volcanic eruption from 1980 produced about 1 cubic km of volcanic material.

These latest findings, which were reported in a recent paper published in the journal Quaternary Geochronology, suggest that the Yellowstone super eruption are less powerful, and more frequent at the same time than previously thought. Also, the study suggest that the volcanic formation known as the Island Park Caldera is more active than previously thought and could help geologists to more accurately predict its next seismic event. The caldera is actually comprised of two smaller calderas and stretches 58 miles from Wyoming to Idaho. The last known Yellowstone eruption to cause a lava flow was about 70,000 years ago, smaller steam-only eruptions have caused seismic events like the one at Yellowstone Lake almost 14,000 years ago that created a 5 km crater.