by Contributing Author
in Geology, News, Physics
Chile’s Villarrica volcano erupted suddenly on 3 March 2015, disgorging a lava fountain more than 2 kilometers high. The eruption—Villarrica’s first in 30 years—was unexpected in terms of its rapid onset and its violence. It was also remarkably short-lived. Within an hour, the explosive activity had ended. Within about a month, the volcano had returned to its usual state, which featured a roiling lava lake situated deep within the steep-walled summit crater.

Forecasting such violent eruptions is the holy grail for applied volcano science. Toward this objective, volcanologists deploy seismometers to detect tremors, tiltmeters and GPS to identify swelling, and multispectral detectors to monitor gas and heat output. Infrasound sensors, which record the low-frequency sounds produced by volcanoes, are an increasingly important component of this diverse tool kit.Volcanologists traditionally have used infrasound surveillance to both count explosions and track eruption intensity, important capabilities when the view of the volcano is obscured [Fee and Matoza, 2013; Johnson and Ripepe, 2011]. Recent studies have demonstrated that infrasound monitoring can also be used to identify important eruption precursors [e.g., Ripepe et al., 2018]. Villarrica gave indications of its unrest through the changing character of its infrasound. We now recognize that Villarrica’s changing sounds provided a warning that lava was rising within the crater [Johnson et al., 2018a].

These observations were made serendipitously as part of a National Science Foundation–sponsored research project, Volcano Acoustics: From Vent to Receiver, that studied the long-distance propagation of the infrasound produced at Villarrica. During the 2015 field expedition, we installed sensors on the summit and flanks of the volcano. Although the 3 March eruption destroyed the summit deployment, sensors outside the damage zone collected data that yielded a full chronology of the volcano’s increasing unrest.

Volcanoes generate infrasound, low-frequency sounds below the threshold of human perception. Despite varied eruptive behaviors, many volcanoes radiate their most intense sounds within a few octaves of 1 hertz, corresponding to sound wavelengths of hundreds of meters. It is no coincidence that this dimension is similar to the dimension of volcanic craters, which play a critical role in modulating the radiated sound [e.g., Kim et al., 2015].

In many ways, a volcano is like a giant musical instrument. As with volcanoes, the size of a musical horn controls the pitch of the sound it makes: Bigger horns make lower-pitched sounds. Musical sounds tend to be pleasing because of the horn’s resonance; air pressure waves sloshing back and forth within a length of brass tube project sonorously from the horn’s bell. The shape of the bell’s flare is important and controls whether a note is sharp and short or rich and reverberating. This quality, which is independent of a note’s frequency or loudness, is referred to broadly as its timbre.As with a musical horn, a volcano’s timbre and pitch are particular to a crater’s shape. Volcanoes with deep craters have a tendency to produce low-frequency sounds, whereas shallow craters radiate higher-frequency sounds [Spina et al., 2014; Richardson et al., 2014]. Narrow conduits often resonate for extended periods, but broad, dishlike craters might not reverberate at all. Although volcanic sound sources can be varied, vents at the bottom of a crater acting as mouthpieces often generate infrasound. The violent expulsion of gas from vents or from a lava lake surface can induce the crater to resonate. 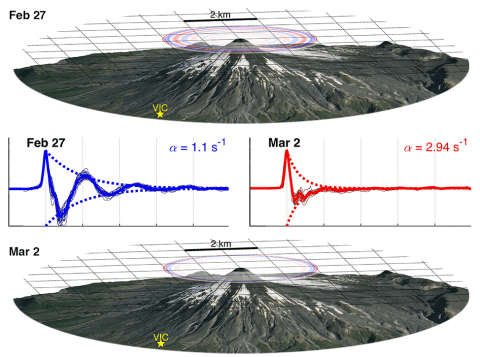 Volcano infrasound merits particular attention when it changes over time. This can happen when volcanoes change their shape as crater walls slump, floors collapse, or a lava lake rises and falls. Villarrica’s lava lake dynamism, for instance, is considered to be responsible for changing infrasound leading up to the violent eruption in 2015. Frequency fluctuations had previously been attributed to oscillating lava lake stages [Richardson et al., 2014], but in 2015, scientists noted a systematic variation that led up to the violent eruption on 3 March. A study by Johnson et al. [2018a] reported two primary observations: The frequency content of the sounds increased around 1 March (from 0.7 to 0.95 hertz), and the timbre changed (Figure 1). Prior to 1 March, reverberations were evident, but afterward, the sound became like a thunk. In other words, the crater’s acoustic source had dampened.

Villarrica’s crater resembles a funnel, with a conical upper section and a narrow conduit beneath. The absence of resonance in early March is important because according to numerical models, it signifies a high stand of the lava lake situated near the flaring section of the crater. During Villarrica’s typical background state, the surface of the lava lake is deeper—and often hidden—within the vertical-walled shaft. By 2 March, the infrasound signals suggest that the lava lake was approaching the crater rim; the horn had become a loudspeaker, as illustrated in the video below.

The trigger for the dramatic 3 March lava fountain, which started at 3:00 a.m. local time, remains enigmatic, but the end result was a violent paroxysm that caused property damage, forced thousands of people to evacuate the area, and made worldwide headlines. Infrasound observations told us that the surface of the lava lake had reached a high level several days before the eruption. These insights may help us to anticipate future eruptions at open-vent volcanoes.

Every volcano has a unique infrasound signature. Compared with Volcán Villarrica, whose resonance evolved during a few days from noticeable to absent, infrasound from Ecuador’s Cotopaxi volcano was notable because it rang consistently in 2016 (Figure 2). Villarrica’s infrasound oscillations lasted cumulatively for a few seconds, but a single oscillation at Cotopaxi lasted for 5 seconds. As many as 16 oscillations were detected in some of the infrasound signals, which, incredibly, lasted more than a minute (Figure 3). 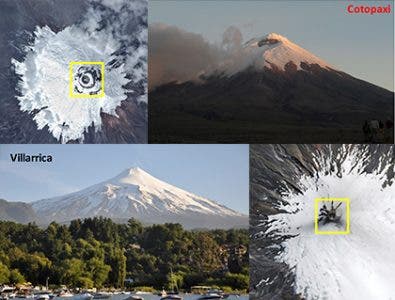 A study of the Cotopaxi events recorded in 2016 refers to these beautiful signals as infrasound tornillos, the Spanish word for screws, because the pressure recording resembles a screw’s profile [Johnson et al., 2018b]. Such waveforms attest to an exceptionally low damping and thus a high quality factor of the crater acoustic source. (Sources with higher quality factors have less damping, and they ring or vibrate longer.)

If Villarrica is like a large trombone, with a leadpipe length that changes over time, then Cotopaxi is like a giant tuba, with relatively unchanging dimensions during much of 2015 and 2016. After explosions in August 2015 opened up Cotopaxi’s crater, the visible conduit extended steeply downward from its 5,900-meter summit. Throughout the first half of 2016, the crater bottom was not visible to aircraft flying over the summit. Aerial observations showed a vertical-walled crater at least 200 meters deep, a dimension corroborated by the modeled infrasound, which suggested a 350-meter shaft.

Infrasound’s journey from volcano source to receiver can be understood only by considering the dramatic modulating effects produced by crater topography [Kim et al., 2015]. It is most plausible that both Cotopaxi’s impressive tornillos and Villarrica’s subdued oscillations are induced by short-duration impulses occurring at the bottom of their craters. An abrupt explosion, or an impulse, contains a broad spectrum of frequencies; however, only those that excite the crater in resonance are well sustained.

Typically, volcano scientists who analyze remote infrasound recordings are generally less interested in the oscillatory “breathing” of the crater outlet (i.e., its infrasound resonance) than in extracting important information about the explosion’s source, such as its duration or mass flux. It is this information that contributes to our growing understanding of how gas accumulates and separates from magma and how it powers volcanic explosions.

However, with recent developments in the understanding of crater acoustic effects, we are better poised to recover important parameters related to the sources of explosions. Cotopaxi and Villarrica represent just two of the dozens of volcanoes active worldwide where infrasound is contributing to our fundamental understanding of eruption dynamics and to our ability to forecast future paroxysms.

This work was funded in part by National Science Foundation grants EAR-0838562 and EAR-1830976 and by the Fulbright Scholar Program.

About the authors: This article was written by Jeffrey B. Johnson (jeffreybjohnson@boisestate.edu), Boise State University, Idaho; and Leighton M. Watson, Stanford University, Calif. The article originally appeared on Eos, 100, https://doi.org/10.1029/2019EO123979. Published on 17 June 2019.