11 Volcanic Craters to Blow Your Mind

Volcanoes are truly amazing – spewing out lava from the depths of the planet, they are a close reminder that our planet is very much alive and constantly changing. Even after they become dormant or extinct, volcanoes are still incredibly majestic – here we’ll take a look at just some of the most spectacular craters they left behind

Diamond head is a tuff cone located on the Hawaiian island of Oʻahu. Known to local Hawaiians as Lēʻahi, it is part of a system of cones called by geologists the Honolulu Volcanic Series. The volcano is estimated to be 200,000 years old, and has been extinct for about 150,000 years – which is why locals have no fear in building around it, and even inside the crater.

Looking almost too beautiful to be real, Diamond Head has been a touristic attraction for decades, representing a short and relatively easy walk up to the crater. Some say that it isn’t even a proper volcano, but a mere vent of the Ko’olau Range. But even if it ever erupted, its eruption was likely very short, lasting no more than a few days, which is why the cone is so symmetric.

We’re staying in Hawaii for the next one, as I just can’t take my eyes off the Koko Crater, on the eastern side of Maunalua Bay along the southeastern side of the same Island: Oʻahu in Hawaiʻi.

Koko Head’s last eruption was 30,000–35,000 years ago, still long enough to be considered extinct. It lies across from Diamond Head at about 14 km and according to legend, was formed when Pele, the goddess of fires and volcanoes, was chased by Kamapuaa, the pig god. Geologists have a different opinion, believing it is part of the same volcanic series as Diamond Head.

It’s time to move from Hawaii all the way to Indonesia, where Kelimutu thrones over the small town of Moni in central Flores island in Indonesia – the alleged birth place of Homo floresiensis, the “hobbit people” described by some anthropologists. These early inhabitants were likely fascinated by the volcano, which is still somewhat active. The crater now hosts two lakes of different colors.

Kelimutu showed increased seismic activity in February-April 1993, with 318 deep and 196 shallow earthquakes recorded, leading researchers to believe that an eruption in the near future is not out of the question. Interestingly, the color of the lakes formed in the crater vary on a periodic basis. Subaqueous fumaroles are the probable cause, encouraging different types of microorganisms to thrive.

Crater Lake (or Okama by its Japanese name) is part of Mount Zaō, a complex volcano on the border between Yamagata Prefecture and Miyagi Prefecture in Japan. The whole area includes a cluster of stratovolcanoes and is the most active volcano in northern Honshu. The crater cannot be accessed, but it can be viewed from a distance (in the summertime) through a spectacular road called the Zao Echo Line.

Among Okama’s spectacular features are the so-called snow monsters. During the winter, strong winds carry water droplets and splash them against trees and their branches, where they freeze, forming near-horizontal icicles. Falling snow settles on this ice, resulting in a ghost-like figure.

At 2,381 metres above sea level, it is the highest volcano in the country. Santa Ana volcano served as an inspiration for Antoine de Saint-Exupéry’s famous French novella (The Little Prince), based on his life with his Salvadoran wife Consuelo de Saint Exupéry, who was The Rose in the story.

The volcano is still active and very dangerous, with an eruption killing two people, injuring seven and forcing many to relocate.

Mount Mazama is another spectacular stratovolcano, located within Crater Lake National Park. It’s much larger than all of the volcanoes we’ve featured on this list so far, with its last eruption being 42 times greater than the eruption of Mount St. Helens in 1980.

The summit was destroyed by an eruption that took place almost 9000 years ago, reducing its height by almost 1 km. Much of the volcano fell into the volcano’s partially emptied neck and magma chamber. At 8,159 feet (2,487 m), Hillman Peak is now the highest point on the rim.

The world’s largest volcanic eruption of the 20th century broke out at Novarupta in June 1912, with 30 times the volume of magma from the 1980 eruption of Mount St. Helens. Although almost all the magma erupted at the Novarupa vent, most of it was stored beneath Mount Katmai, 10 km away. Most of Mount Ketmai actually collapsed that day. 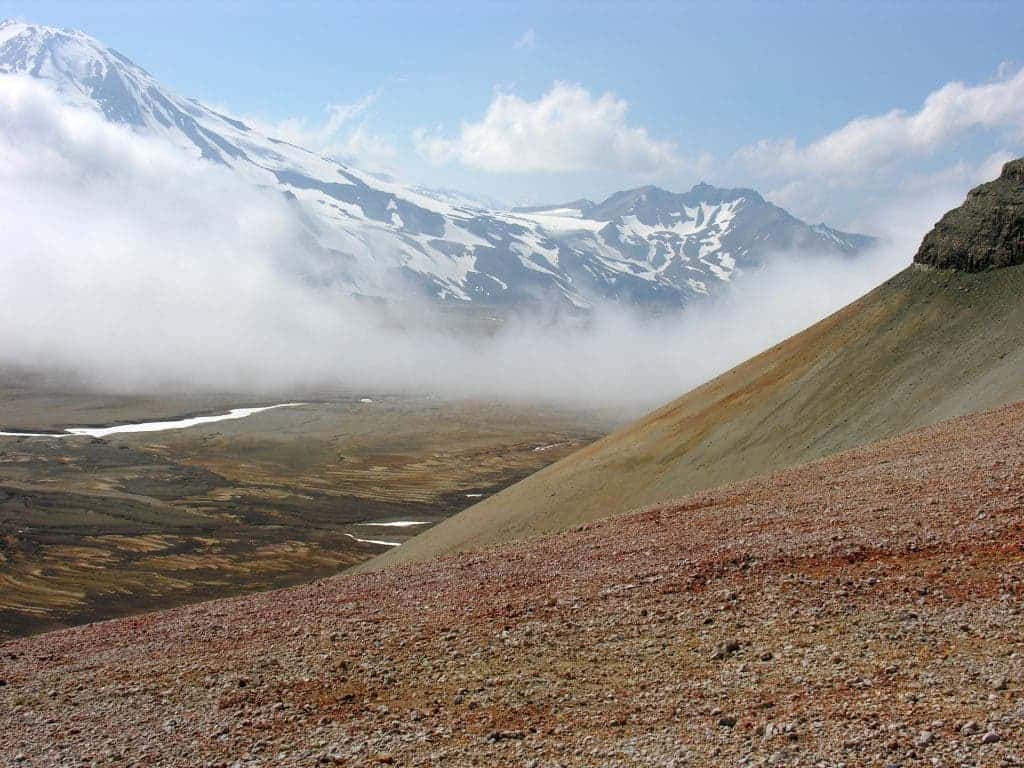 Colorful ash in the Valley of Ten Thousand Smokes. Image via Wikipedia.

The eruption and resulting pyroclastic ash flow formed the Valley of Ten Thousand Smokes, named by botanist Robert F. Griggs, who explored the volcano’s aftermath for the National Geographic Society in 1916.

The eruption took place in very moist conditions, which allowed much water to permeate into the volcano, creating what is called a wet eruption. These conditions lasted for the entire length of the eruption, and consequently, the area has a bowl-like crater unfilled by scoria or lava.

If you haven’t had enough craters, we’ve got a treat for you – a crater in a crater! Aogashima is a volcanic Japanese island in the Philippine Sea some 358 kilometres (222 mi) south of Tokyo and administered by the city. The area has a very rich volcanic history and the volcano is still considered active, despite not having an eruption for more than 200 years.

There is a small human settlement on Aogashima with a population of 170. It’s not clear when this settlement began or how it dealt with the record volcanic activity in 1652, and the earthquake swarm in July 1780. It is known however that In April 1783, lava flows from the Maruyama cone resulted in the evacuation of all 63 households on the island, but two years later, in what is the last recorded eruption, over 100 people lost their lives.

If that somehow still wasn’t enough volcano-ception for you, then I’ve got something even better: Taal Volcano. The crater is pretty spectacular in itself, but what makes it even more mind bending is that it is an island within a lake on an island within a lake on an island. Pretty neat huh? So on Luzon island in the Philippines, you have Taal Lake and Taal Volcano, which is an island in the lake. Inside the volcano crater – you guessed it: there’s a lake with an island.

But this very neat fact doesn’t diminish the danger posed by this volcano. Because of its proximity to populated areas and its eruptive history, the volcano was designated a Decade Volcano: 16 volcanoes identified by the International Association of Volcanology and Chemistry of the Earth’s Interior (IAVCEI) as being worthy of particular study because of the danger they posed. Taal’s eruptions claimed at least 5000 lives.

It’s only fitting to end with a volcano from Iceland, one of the most active volcanic areas in the world. Iceland has several hundreds of volcanoes, with some 30 systems being still active today. Kerid is a volcanic crater lake located in the Grímsnes area in south Iceland.

The genesis of Kerid is still debatable, but now the main theory seems to be that it is a  cone volcano which erupted and emptied its magma reserve. After the magma was depleted, the weight of the cone caused the structure to collapse into the empty magma chamber, now hosting a lake. The lake itself is shallow, but due to the abundance of minerals from the soil, is an opaque and strikingly vivid aquamarine.