Toddlers are a bunch of little hypocrites, study finds

If you have really young kids, under three of four years old, you might have noticed just how tricky they can be in their actions – one thing they say, another thing they do. A recent study from University of Michigan puts these discrepancies into a psychological discussion. The researchers’ findings surprisingly show that children as young as three, despite knowing that they should share, don’t practice what they preach until they turn seven years-old. 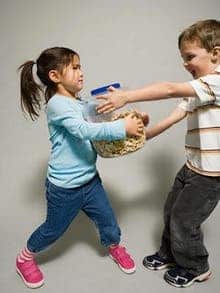 What a child thinks they should do, what they would do and what they actually do are all questions that have been asked and discussed by psychologists for some time now, but the present study is really enlightening in terms of child hypocrisy. The findings might add weight or disprove current theories that discuss the formation of morality and consciousness.

For the study, the researchers gave 102 children aged three to eight years four stickers and asked them how they should device them with other children.

“Children as young as three were very clear that, if all were equally deserving, they and others should share half,”   Dr Craig Smith from the University of Michigan said.

Very thoughtful of them, bless their pure little hearts. They actual behavior was quite different, however: the three year-olds kept most stickers for themselves, despite knowing and stating earlier that they should share. In wasn’t until they got older that these stickers were divided fairly.

What’s interesting to find out at this moment is not necessarily why the younger toddlers were hypocrites, but why the older ones were more socially abiding and thoughtful of their fellow peers.

“It looks as if children increasingly realise they should not just preach but act accordingly,” says co-author Professor Paul Harris of Harvard Graduate School of Education.

“Essentially, they start seeing themselves as moral agents.”

Previous studies have shown that, as they age, children gain a stronger power to inhibit their own actions, but that’s not to say that the young toddlers were simply overwhelmed by  “last-minute failure of willpower”, nor that the older children were compelled to keep the stickers for themselves but resisted the temptation because of their superior sense of restrain.

Smith says the children begin to place more and more importance on this sharing norm out of an increase sense of morality: “With increasing age, the sharing standard that all children endorsed seemed to carry more weight.”

The study was detailed in a paper published in the journal PLOS One.