The hand of blood: man makes sure no ocean water remains pristine

by Mihai Andrei
in Oceanography, Studies
Reading Time: 2 mins read
A A 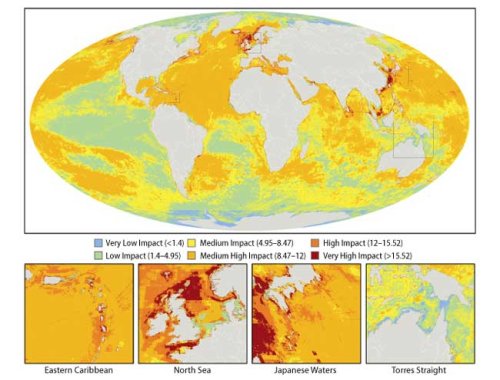 A new study has shown that not even a square meter of the world’s oceans has been left untouched by human activities. Oceansystems face probably the largest of threats from humans including overfishing, pollution, and rising ocean temperatures and ocean acidification caused by global warming.

The study has been led by an international team of scientists which analyzed data from 17 different types of these human impacts and fed them into a model that produced a map of the world’s oceans with each square kilometer assigned a value of the level of impact at that particular spot. The results were published in the Feb. 15 issue of the journal Science.

The above map shows that human activity has affected, to some extent, all parts of the oceans, with 41 percent being strongly impacted by several human-caused drivers.

“What is new today is that… we know how much of the oceans are in trouble and this figure is frighteningly high,” said co-author Fiorenza Micheli, a Stanford University marine ecologist, at a news conference in Boston.

The most damaged regions are those surrounding the most advanced countries and the most industrialized areas; these areas include nclude the eastern Caribbean, the North Sea, the eastern North American seaboard, the Mediterranean, and the waters around Japan.

“For the first time we can see where some of the most threatened marine ecosystems are and what might be degrading them,” said study co-author Elizabeth Selig of the University of North Carolina.
This information enables us to tailor strategies and set priorities for ecosystem management,” said Selig. “And it shows that while local efforts are important, we also need to be thinking about global solutions.”