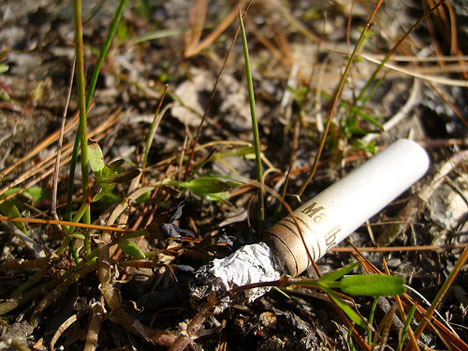 If you are a smoker you’ve definitely heard more arguments than you can count against keeping such a habit. However, you continued to smoke, no matter what scary studies did scientists come up with. But apparently, this is not a decision to affect only you: your canary, dog, cat or why not turtle, might be at risk because of you smoking. So, would you give up on it for your pet?
An anti-smoking campaign was started after Sharon Milberger at the Henry Ford Health System in Detroit used an on-line survey to determine what it is that could make people give up their daily dose of tobacco. 3000 people responded, out of which 600 were smokers. About a third said that if second-hand smoking jeopardized their pet’s health, they would quit without second thoughts.
Apparently, pet owners seem to be quite worried about what happens to their furry or feathered flat-mates and they do have reasons for that.
Pets have their health put at risk if they inhale the smoke, eat cigarette buds or nicotine replacement gum or patches. From 1 to 5 cigarettes and 1 cigar can be enough to kill your pet if it happens to ingest it.
Cigarette smoke proves to have severe effects too:
Salivation
Diarrhea
Vomiting
Cardiac abnormalities
Respiratory difficulties and respiratory paralysis
Feline lymphoma in cats
Lung cancer in dogs
Nasal cancer in dogs
Breathing problems in dogs and asthmatic-like symptoms in cats
All these diseases should be enough to make someone think twice before lighting another cigarette while their dog is playing around the room. And, of course there are the effects this habit has on people, which are just as bad; however, a passive smoker may choose to get out of the room, while a pet does not have the same possibilities. So, could this campaign be the one to make you throw away your pack of smokes?
source: Tobacco Control