by Mihai Andrei
in Home science, Studies
Reading Time: 2 mins read
A A 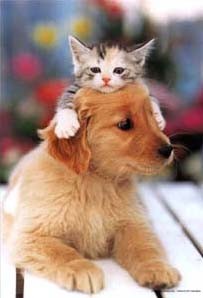 Pets do more than it may appear for their owners: they teach us a lot about unconditional love, responsibility, death and, of course, pooper scoopers. But aside from that they probably keep a child from developing allergies rather than causing it.

This is not yet a scientific certainty, but the idea that pets might provide an immune benefit stems from a controversial theory born in 1989 called the hygiene hypothesis. It postulates that the sharp rise in allergic diseases this century can be explained, at least in part, by our higher cleanliness standards. Bacteria and other parasites are thought to “prime” our immune systems to fight the important fights—dangerous infections—while smartly ignoring the frivolous ones.

Matthew Perzanowski, an environmental health scientist at Columbia University’s Mailman School of Public Health claims that pet ownership appears to be associated with a decreased risk of developing allergies in many cases. In countries with many cats a pet cat appears to provide a protective effect. But in countries with few cats it increases the risk for allergic sensitization. But it is hard to distinguish between the direct effect of owning a dog and the lifestyle choices that accompany it, such as going outside more, being more physically active, and absorbing more sun and vitamin D. The scientists say that it may not be the dog per se that’s having an effect.

But there is some molecular evidence. It is known that dogs have endotoxins in their fur and when cells from children who have grown up in homes with higher endotoxin levels are directly exposed to allergens in the laboratory, they release fewer cytokines, chemicals associated with allergic responses. So there is nothing that is for sure aside from the fact that pets bring a good mood into the house. And that probably they help kids not catch some diseases and allergies. That remains an open topic.