Sharing bacteria with your kids using their pacifier may reduce the children’s risk of allergies, asthma and eczema

by Mihai Andrei
in Diseases
A A

Researchers in Sweden have shown that children whose moms and dads placed their childrens pacifiers in their own mouths, thus sharing some of their own bacteria with them, had a lower risk of allergies, asthma and eczema. 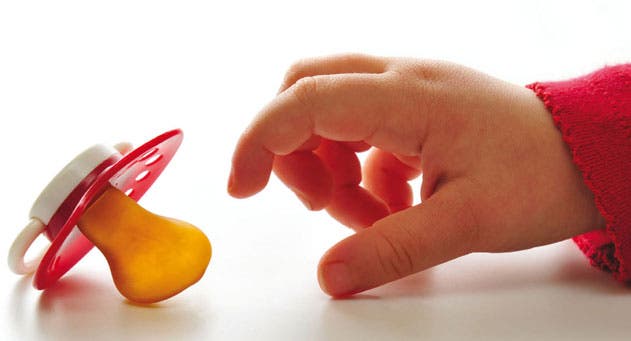 Arguably, the sample size of the study is too small, and more research is needed in order to confirm these original findings, but the trend which they suggest is pretty clear.

“Western culture is becoming an increasingly sterile environment, but that might not be ideal for young children as their immune systems develop,” says John Lee, MD, director of Boston Children’s Hospital’s Food Allergy Clinic. “Their bodies need to learn what to attack and what to ignore. But if they’re exposed to too few, or the wrong kinds of germs, it can hinder development, sometimes confusing the immune system into attacking nonthreatening entities like pollen or food, which is what causes allergies.”

Newsflash, ladies and gentlemen (but especially ladies) – keeping your babies in a bubble, isolated from the real world as much as possible is not a good thing. The odds are that in the long run, you will do more harm than good.

For the study, researchers followed 180 babies and their parents. They interviewed parents about their pacifier-cleaning practices (whether they used spit, tap or boiling water), and then they checked the childrens allergies at 18 and 36 months. Nearly half of all parents involved in the study admitted they used the occasional spit and clean of the pacifier, and kids whose parents did this were found to have a significantly lower chance of the above mentioned conditions. Blood tests also showed that children whose parents cleaned their pacifiers with spit had lower levels of a specific type of a particular immune cell that is usually linked to allergies.

While the community’s response to this study was generally positive, it was generally argued that the sample size is too small to draw any definite conclusions.

“This study was too small to draw any conclusive facts about allergy and the sharing of microbes,” says Lee. “But I joke with families that a little dirt may be good for their kids, and this study certainly wouldn’t contradict that.”

Among the critics, some have claimed that sharing this kind of oral bacteria with infants can lead to cavities, but Man Wai Ng, DDS, MPH, dentist in chief at Boston Children’s says it’s extremely doubtful:

“The reality is that saliva transfer is almost completely unavoidable, especially when babies get hugged and kissed a lot,” she says. “Since oral bacteria is just a part of life, parents should focus on what they can do: good brushing with a tiny smear of fluoride toothpaste, limiting exposures to sugary foods and drinks and visiting a dentist by age 1.”