by Tibi Puiu
in Research, Technology
Reading Time: 2 mins read
A A
Share on FacebookShare on TwitterSubmit to Reddit 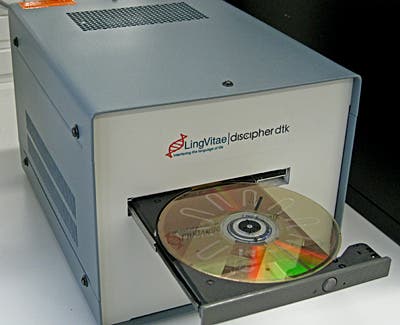 In an extraordinary feat of ingenuity,  a team of Swedish researchers have converted an all too common commercial DVD drive into a fully working laser scanner microscope capable of performing blood sample analysis and cellular imaging. They achieved this simply by replacing a few hardware pieces in the drive and developing a software that perform the analysis tasks. The researchers believe their technique could be scaled to produce lab-DVD drives for as less as $200, in contrast to typical lab equipment that costs at least 100 times as much.

The prospects area extremely appealing  since this effective and cost efficient DVD drive lab could be easily implemented in poor areas, where staff typically can’t afford expensive lab equipment and where it’s actually the greatest need for it. For instance, the repurposed drive has been proven to work great as a HIV testing kit.

“With an ordinary DVD player, we have created a cheap analytical tool for DNA, RNA, proteins and even entire cells,” says Aman Russom, senior lecturer at the School of Biotechnology at KTH Royal Institute of Technology in Stockholm. The so-called “Lab-on-DVD” technology makes it possible to complete an HIV test in just a few minutes, he says.

The basic modifications the DVD drive needs to suffer are remarkably simple: the typical optical block of the drive is replaced with a light sensor capable of reading information from blood samples, while the samples themselves need to be placed on translucent disks that resemble DVDs. The disks are paramount for this to work, since each disk is designed specifically for the task at hand. If you need to analyze blood for HIV, you’ll need a certain type of disk since the disease needs to bind to it. This is far from being an issue, however, when compared to the alternative: flow cytometry units that can cost upwards of USD 30,000, excluding maintenance.

“The low cost of the technology makes it suitable as a diagnostic and analytical tool in clinical practice close to the patient,” Russom says. “And because it delivers extremely fast analysis, the patient does not need to go home and wait for a response. They can get it right on the first visit to a doctor.”

Findings were reported in the journal Nature Photonics.