Malaria to be defeated by starving parasite to death

by Mara Bujor
in Discoveries, Health & Medicine, Research, World Problems
A A
Share on FacebookShare on TwitterSubmit to Reddit 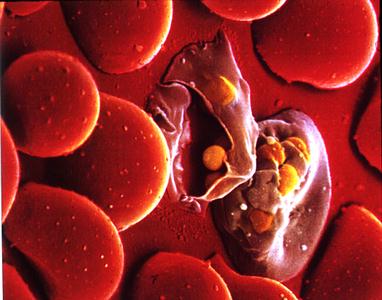 It claims the life of a child every 30 seconds and about 40% of the entire world population is at risk because of it. About 500 million people become very ill with malaria every year and about 2 million of them don’t make it. The situation seems really grim especially as in some parts of the world medicines seem to have no effect whatsoever. And yet, the solution might come in another shape as a team from Monash University claims- by starving the parasite to death.

Malaria is caused by a small parasite, Plasmodium, which is transported by mosquitoes, a simple bite being enough to infect someone. The parasite then multiplies very fast in the liver, attacking the red cells. The first symptoms usually appear  a fortnight after the bite and include headaches, vomiting and high fever. If not treated urgently with artemisinin-based therapies, it can easily kill someone as the main organs stop receivig blood the way they should.

However, the new discovery shows that Plasmodium can, in fact, become vulnerable too. The researchers were able to deactivate the parasite’s final stage of the digestive machinery, thus making it impossible for it to survive as it stops receiving nutrients. By developing a new class of medicines able to do this, malaria could finally be controlled more effectively, especially as it has grown immune to some types of conventional treatment.

The malaria parasite needs to break down blood proteins in order to feed, the digestion starting into a special compartment called vacuole, which serves the same purpose as a stomach. However, an enzyme called PfA-M1, which is vital for the parasite, is located outside the vacuole, so it can easily be targeted by a drug. Without the enzyme, Plasmodium cannot last and dies because t does not receive any more nutrients. Th researchers are really excited about the discovery as it could save the lives of millions, not to mention improving it for others as an African child can get sick with malaria more than 5 times per year. Until now, mosquito nets and methods of controlling the insect population were the main to be used against the disease. Maybe a new chance arises.

The first human test will take place supported by the Medicines for Malaria Venture, Geneva, Switzerland.