Ice sheets in Antarctica formed by massive fall in CO2

by Tibi Puiu
in Climate, Environment, Research, Studies
Reading Time: 3 mins read
A A
Share on FacebookShare on TwitterSubmit to Reddit 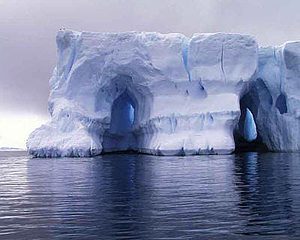 Antarctica is the most the arid place on Earth. Its climate is so rough, so hazardous that no permanent human populace can live there, however just a few million years ago the harsh plains of the south and north poles had a subtropical climate – a paradise for life. During a transition period of just 100,000 years, a blink of an eye in geological timeline, the temperature went down dramatically and thus the same ice sheets that are in place today were formed. Scientists have been debating for some time what lead to this event, and now a new research shows that a massive fall in the amount of atmospheric carbon dioxide is the true culprit.

The research shows CO2 level plunged by 40 percent before and during the formation of the ice sheet 34 million years ago, during the Eocene to Oligocene climate transition, when the first ice shards formed. Previously it was assumed that a change in ocean currents was the cause for the sudden drop in temperature, however this couldn’t be farther from the truth – quite the opposite. It is quite evident when the Southern Ocean currents and temperatures of that period – vastly different from today – are factored in, it becomes apparent that Antarctica’s big freeze followed a fall in CO2 levels.

“Our research recognised that the flows of deep ocean currents at the end of the Eocene were dramatically different from those of today because of the altered position and shape of continental masses,” says NSW Climate Change Research Centre researcher Dr Willem Sijp.

“Previous research relied on different temperature estimates and had also not taken these different currents into account. This decline was a critical condition for global cooling and the emergence of the Antarctic ice sheet. In short, the apparent increase of CO2 during Antarctic glaciation is refuted.”

The estimates in carbon dioxide levels millions of years ago were possible by analyzing  ancient algae remnants from deep-ocean sediments, in which they observed a change in their biochemical molecules that correspond with the sudden CO2 drop. The measurements where factored in with the ocean currents from that period.

The whole event signified a major tipping point in Earth’s climate. Imagine just that a few millions of years before the cooling, the southern and northern poles of the planet were warm and wet, inhabited by a luxuriant tropical vegetation and fauna. Today, the ice sheets of Antarctica are over one kilometers thick and exercise a fundamental influence across the whole globe, from impacting the circulation of cold and warm air masses to wind strength, precipitation patterns and variability in regional and global temperatures.

“The onset of Antarctic ice is the mother of all climate ‘tipping points,'” says Pagani. “Recognizing the primary role carbon dioxide change played in altering global climate is a fundamentally important observation.”

The research found that the tipping point in atmospheric carbon dioxide levels for cooling that initiates ice sheet formation is about 600 parts per million. At present day, we’re currently nearing 400 million parts per million, which is more than enough to keep the ice sheets in place for a lot of time to come, the researchers claim.

“The system is not linear and there may be a different threshold for melting the ice sheet, but if we continue on our current path of warming we will eventually reach that tipping point,” says Huber. “Of course after we cross that threshold it will still take many thousands of years to melt an ice sheet.”

This highly remarkable event from Earth’s recent history shows just how important greenhouse gases are on the climate.

The new findings were reported in the journal Science.