Earth’s prehistoric atmosphere was covered in a haze similar to Saturn’s moon, Titan

by Tibi Puiu
in Environment, Geology, Research, Science
Reading Time: 2 mins read
A A
Share on FacebookShare on TwitterSubmit to Reddit 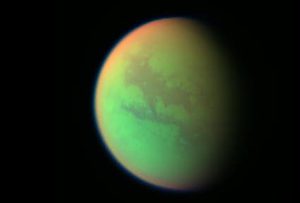 If you think today’s urban air, thickened with noxious smog, is terrible, just imagine how the Earth was filled in a shroud of hydrocarbons some 2.5 billion years ago. Back then, a haze dominated by methane engulfed the atmosphere such that light could barely reach the ground, similarly to what can be seen today on Titan, Saturn’s moon. A team of researchers modeled Earth’s atmosphere from its early history and found there was a period in which the planet’s atmosphere regularly switched between  “organic haze” (methane dominant) and “haze-free” (oxygen dominant), before finally stabilizing in an oxygenated atmosphere, allowing complex life to form.

Researchers at Newcastle University dissected Earth’s ancient atmosphere by analyzing the chemical make-up of a core of ocean sediment deposited on a region of South Africa, flooded between 2.65 and 2.5 billion years ago.  During this time the only life on Earth was formed by microbes, trapped from further evolving in complexity by a methane bond. These tiny microbes, however, were the ones which finally turned the atmosphere around, as they steadily released oxygen through photosynthesis. It was a full-out war actually, with victories and defeats on both sides.

During this 150 million year time frame, researchers found that the atmosphere shifted steadily between methane-rich and methane-poor composition, the latter most likely causing the dissipation of the haze, little by little.

“Models have previously suggested that the Earth’s early atmosphere could have been warmed by a layer of organic haze. Our geochemical analyses of marine sediments from this time period provide the first evidence for such an atmosphere.”

“However, instead of evidence for a continuously ‘hazy’ period we found the signal flipped on and off, in response to microbial activity.”, said Dr. Aubrey Zerkle from the School of Civil Engineering and Geosciences at Newcastle University.

Thus, every few million years or so, the atmosphere altered between states, due to irregular methane dumps by organisms, most likely triggered by different amounts of nutrients available in the ocean.The researchers back up the evidence presented in the study with NASA models of Earth’s ancient atmosphere, which demonstrate the effect of early methane levels.

“What is most surprising about this study is that our data seems to indicate the atmospheric events were discrete in nature, flip-flopping between one stable state into another,” explains co-author Dr Farquhar.

“This type of response is not all that different from the way scientists think climate operates today, and reminds us how delicate the balance between states can be.”

The findings were published in the journal Nature Geosciences.