by Dragos Mitrica
in Science
Reading Time: 2 mins read
A A
Share on FacebookShare on TwitterSubmit to Reddit

Titan is in the spolight again! After astronomers spotted a passing geological feature, now a joint team from NASA and ESA found evidence that the moon may have formed before its planet. 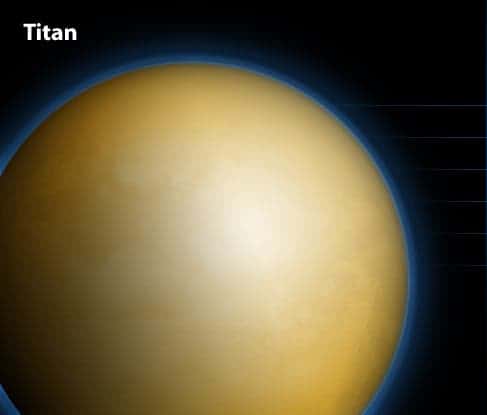 Generally, moons take shape after planets – but now, researchers have found convincing evidence that the nitrogen in Titan’s atmosphere originated in ancient conditions, in the cold birthplace of the most ancient comets from the Oort cloud — a spherical shell of icy particles that enshrouds the Solar System.

The evidence they found was isotopical. Isotopes provide valuable insight into the origin of things – be them planets or rock samples. Basically, in planetary sciences, there are many cases where the ratio of one isotope to another can provide crucial information regarding the age of planets – the ratio of isotope A to isotope B tells you how old it is (sort of).

“When we looked closely at how this ratio could evolve with time, we found that it was impossible for it to change significantly,” Mandt said in a press release. “Titan’s atmosphere contains so much nitrogen that no process can significantly modify this tracer even given more than four billion years of Solar System history.”

What they found was that the Solar System was simply not old enough for the isotope ratio to change like it has – which seems to indicate that Titan has its origin in the Oort Cloud. The Oort cloud is a cloud of predominantly icy debris believed to surround the Sun at up to 50,000 AU; if their results are correct, then Titan was created before the Earth and most of the Solar System as a dwarf planet and then was captured into orbit around Saturn.

“This exciting result is a key example of Cassini science informing our knowledge of the history of [the] Solar System and how Earth formed,” said Scott Edgington, Cassini deputy project scientist at NASA’s Jet Propulsion Laboratory.

The research was published this week in the Astrophysical Journal Letters.