Green visitor to pass through the solar system

by Mara Bujor
in Astronomy, Remote sensing, Space
A A
Share on FacebookShare on TwitterSubmit to Reddit 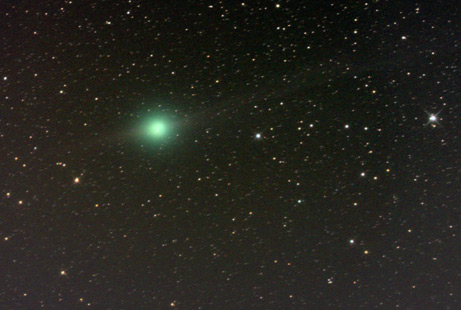 Unfortunately for some, the green visitor is not an alien coming to greet us but something else, even though it also comes from far, far away. On the 24th of February the comet Lulin will pass within 61 million kilometers of Earth, thus being able to be seen with the naked eye from some locations.

This is the first time the comet is visiting the solar system, passing at a distance that is about 41% of the one between Sun and Earth and 160 times farther than the Moon. The Lulin comet was discovered by a Chinese student, Quanzhi Ye, in 2007 and it was named after the observatory where it was seen the first time.

The comet’s greenish cast is given by the two gases -cyanogen and diatomic carbon- from its Jupiter-sized atmosphere, which are lighted by the sun.

It is estimated that it will reach a maximum brightness of 4th or 5th magnitude, which means that it could be seen without using special instruments from some locations, but binoculars or a small telescope would certainly make it an easy target.

There is, however an element of unpredictability as the comet will lie close to Saturn in the constellation Leo. Saturn will certainly be able to be seen with the naked eye, however. The comet lulin is believed to have originated in the deep freeze of the Oort Cloud, which is at a distance thousands of times bigger than the one between Sun and Earth.

If this hypothesis is correct, then Lulin was bombarded  for eouns by cosmic rays, which are highly common in space, thus creating a thick crust of organic compounds. This crust might harden the process through which frozen water and other volatile ices turn into gas because of the heat of the sun, creating its famous tail. This may make the apparition of the comet less spectacular.

Several telescopes, including NASA’s Infrared Telescope Facility on Hawaii’s Mauna Kea, will be used to examine the polarization of light reflected from the comet’s halo, especially as the earth will be between it and the Sun, this rare configuration making the whole process easier. By this, it will be established what size and shape the dust particles from the tail have and also if they are smooth or rougher. Previos observations have shown that carbon monoxide and methane are part of the comet’s chemical composition.

However, Brian Marsden of the Harvard-Smithsonian Center for Astrophysics in Cambridge claims that the comet does not really deserve that much attention. By the time it will have got closer to the Earth, there will probably not be very much to see. So, if you have an insomnia and you are not really fond of astronomy you might as well watch TV.
Source: University of Leicester