Earth’s oceans will boil away, leaving the planet as barren as Venus – in about 1 billion years or so

by Tibi Puiu
in Climate, Environmental Issues, Research
Reading Time: 3 mins read
A A
Share on FacebookShare on TwitterSubmit to Reddit 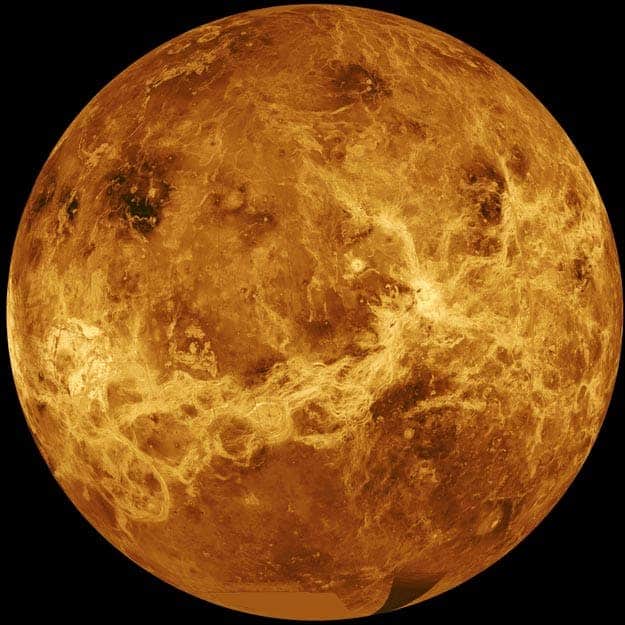 A interesting, yet controversial discussion, among climate scientists is set around the runaway greenhouse effect. Basically, past a certain threshold when the incoming solar energy is greater than the energy a planet can emit back into space, equilibrium is broken and the planet’s atmosphere enters a positive feedback loop. In the case of Earth, when this happens, it will cause the world’s oceans to boil and all water vapor to escape into space, leaving the planet a desolate, red hell similar to Venus.

The argument is not when such an event will happen, this is rather a certainty considering the sun’s ever expanding natural luminescence, but when. Some climate scientists argue that if we burn enough fossil fuels, a substantial influx of CO2 will cause a chain of events that will trigger the runaway greenhouse effect – more CO2 means larger surface temperatures which causes water in the oceans to phase into water vapors which amplifies the warming effect since water vapor is a greenhouse gas that absorbs radiation as well.  From a certain threshold, the process can run out of control eventually boiling out the entire planet’s oceans. Is such a thing possible in the near future, considering our current fossil fuel usage and recent panic waves spurred by record-breaking 400ppm CO2 atmospheric levels?

James Hansen, a climate scientists, argues in his book , Storms of my Grandchildren, that if we burn all oil, natural gas, coal and whatnot other fossil fuel we might have at our disposal, then “[…] there is a substantial chance we will initiate the runaway greenhouse. If we also burn the tar sands and tar shale, I believe the Venus syndrome is a dead certainty.”

I haven’t read Hansen’s book, so I don’t know through which means he reached this conclusion, however  Colin Goldblatt of the University of Victoria in British Columbia and colleagues recently published a paper in which they ran supercomputer climate models and found that indeed such an event is possible.  The so-called ‘Venus syndrome’ requires a lower thermal radiation threshold than previously believed to kick-start this doomsday scenario, previously thought to be theoretically impossible. However, rest assured, this won’t happen too soon.

According to Goldblatt, who spoke to National Geographic, we’d need to put ten times as much carbon dioxide in the atmosphere as you would get from burning all the coal, oil, and gas reserves in the world —about 30,000 parts per million.

It turns out that once sufficient water vapor exists, there is a determinate amount of radiation that can be emitted to space. When the amount of incoming sunlight exceeds this fixed limit, you get a runaway greenhouse effect.

“It’s like if you take a layer of tinted glass–one layer you’ll be able to see through. But if you stack up 10, 20, 100 layers, you can’t see through it,” Goldblatt told National Geographic.

When exactly will this happen though? At the dawn of the solar system, the sun was only 70 percent as bright as it is now, and clearly as it will grow brighter, more and more incoming radiation will hit our planet. Venus, which is much closer to the sun than Earth, experienced this runaway greenhouse early in its history. So, according to the researchers’ calculations somewhere between half a billion and a billion years from now Earth will transition to a runaway greenhouse. At that point, Earth’s future will look like Venus’s past, the authors write.

The report was published in the journal Nature Geosciences.