Carnivorous plants turn to veggie diet due to pollution

by Tibi Puiu
in Environment, Pollution, Research, World Problems
Reading Time: 3 mins read
A A
Share on FacebookShare on TwitterSubmit to Reddit

Carnivorous plants may soon have to give up their meaty habits and turn veggie, as a recent study found that carnivours plants in Swedish bogs have significantly reduced their preying behavior, due to nitrogen pollution. 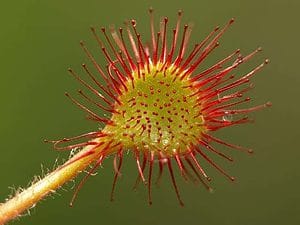 The  sundew drosera rotundifolia is one of the most common carnivours plant species, growing across much of Northern Europe in rain-fed bogs. Typically, their habitat has low-nitrogen intake which forces them to seek such nutrients elsewhere; evolution, thus, took them on a path where they developed the necessary means and measures to trap and devour insects.

Human induced nitrogen pollution, however, due to fossil fuel burning from plants and vehicles have caused  increased levels of nitrogen deposited by rainfall over these bogs. The carnivorous plants now have access to a lot more nitrogen than they used to need to survive, dwindling their appetite, but at the same time destabilizing the local ecosystem.

“If there’s plenty of nitrogen available to their roots, they don’t need to eat as much,” explains Dr. Jonathan Millett from Loughborough University, the report’s lead author.

Now, these plants absorb more nitrogen through their roots.  Plants in lightly-polluted areas got 57 per cent of their nitrogen from insects; in areas that receive more nitrogen deposition, that figure fell as low as 22 per cent. These figures were reached after scientists analyzed the nitrogen isotope composition in plants; different forms of nitrogen differing by atomic mass. Nitrogen isotopes come in a different mix whether of biological origin, say insects, or from rain deposits.

It’s been found that the carnivorous plants’ leaves are now less sticky, their main weapon for trapping insects, and have also suffered a transformation in colouring, from a red tint, which attracted bugs, to a more greenish hue.

That might no seem like much, but one needs to consider that in an ecosystem, everything is about niches. Each species takes up a free niche, and evolves in that particular direction. Carnivorous plants sped a high amount of energy an specialized elements, and  once a species has gone down this path, it finds it hard to compete with non-carnivorous rivals outside its favoured nitrogen-poor setting.

“In the sites with more nitrogen deposition, these plants now get much more of their nitrogen from their roots, but they still have to bear the residual costs of being carnivorous, and other plants without these will be better able to survive,” Millett comments. “So it’s quite likely we’ll see less abundance and perhaps local extinctions from carnivorous species. The individual plants get bigger and fitter, but the species as a whole is less well adapted to high-nitrogen environments and will lose out over time.”

A similar study is planed for hobs in the UK, where scientists expect to find more startling ratios, because of the more extensive fossil fuel ussage. Low-pollution Swedish bogs showed deposition rates of around 1.8kg of nitrogen per hectare per year; many UK sites are closer to 30kg.

The study was published in the journal New Phytologist.